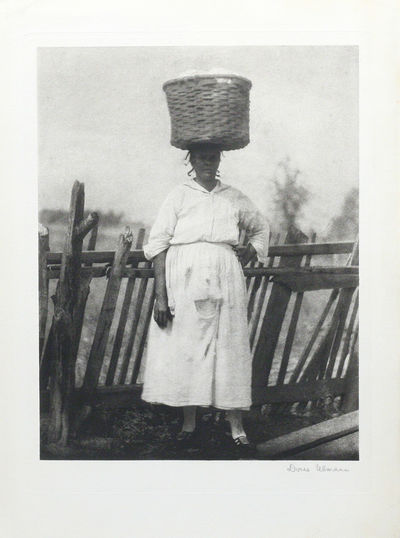 A VERY RARE COMPLETE COPY WITH 90 HAND-PULLED PHOTOGRAVURES, AN ADDITIONAL SIGNED PHOTOGRAVURE, AND THE ORIGINAL SLIPCASE. "Ulmann's photographic collaboration with Julia Peterkin focuses on the lives of former slaves and their descendants on a plantation in the Gullah coastal region of South Carolina. Peterkin, a popular novelist who won the Pulitzer Prize in 1929, was born in South Carolina and raised by a black nursemaid who taught her the Gullah dialect before she learned standard English. She married the heir to Lang Syne, one of the state's richest plantations, which became the setting for Roll, Jordan, Roll. Ulmann's soft-focus photos - rendered as tactile as charcoal drawings in the superb gravure reproductions here - straddle Pictorialism and Modernism even as they appear to dissolve into memory" (Roth, 101 Books ).

The title derives from an 18th-century English spiritual which became popular among African-American enslaved communities, and was later adopted as an encoded message of escape. While the photographs evade historical or stylistic categorization, Ulmann's delicate use of light, a soft-focus lens, and modernist priority of form, tonal contrast, and quality of line helped imbue verisimilitude and life into her subjects, producing images that are not "forced or fantastic" but "straightforward, sympathetic, and wholesome" (Robert Penn Warren).

In this way, Ulmann's images and Peterkin's text generated a body of work critically acclaimed as one of the first art books depicting African American as people, rather than stereotypes. It is understood as one of the finest, most renowned photogravure-illustrated books of the twentieth century. (See: William Clift. The Darkness and the Light: Photographs by Doris Ulmann). Roth 101. Parr & Badger I, 135.

Extremely rare undamaged and in the original slipcase and with the original signed photogravure: It is rumored there was a flood in the photographer's storeroom that destroyed many copies before they were issued. In any case, very few copies have appeared on the market in fine, complete, original condition.

Photographs by Doris Ulmann, text by Julia Peterkin. New York: Robert O. Ballou, 1933. Quarto, original cream half-cloth and brown boards (with portrait stamped in blind on front board), top edge gilt, other edges untrimmed; original slipcase. Housed together in a custom half-leather box with display window for signed photogravure. Very minor soiling to spine, split to one edge of slipcase. All but two of the tissue guards lacking (which is fortuitous since the tissue guards have been known to stain the plates).

LIKELY AS FINE A COPY AS ONE CAN OBTAIN OF ONE OF THE CENTURY'S MOST IMPORTANT PHOTOBOOKS. (Inventory #: 2415)
$38,000.00 add to cart or Buy Direct from
Manhattan Rare Book Company
Share this item