A HALF CENTURY IN SALEM 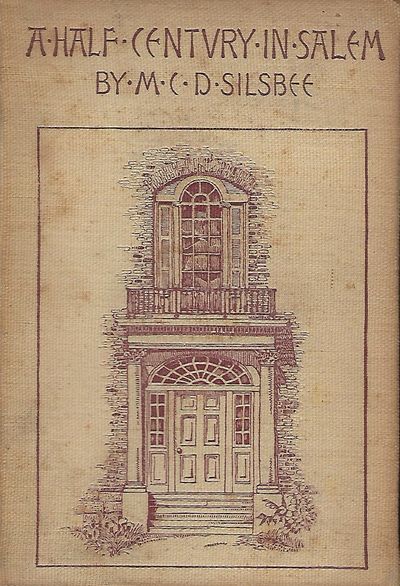 by SILSBEE, M.C.D.
Boston: Houghton, Mifflin & Company, 1887. First Edition. Signed presentation from Silsbee on a front blank page: "M.C. Sparks from M.C.D. Silsbee- with love. Feb. 22d, 1887." Marianne Cabot Devereux [1812-1889] was born in Salem in 1812 and has an interesting history there. Her father, Humphrey Devereux, was apparently captured by the British during the War of 1812 and imprisoned on Bermuda at the time of her birth. She married Nathaniel Silsbee Jr., son of a U.S. Senator and later two-term Mayor of Salem. In 1829 they moved into the Silsbee mansion on the Common. The Silsbees left Salem for Boston in 1862 when Nathaniel became Treasurer of Harvard, and then moved to Milton following his retirement. During this period, M.C.D. wrote poems and her first publication was "Memory and Hope"- a compilation of mourning poem issued anonymously in 1851. "A Half Century In Salem" is about the day-to-day life, people, and places in Salem while she lived there. Chapters include Old Letters; The Homes of Salem; The Children's Joys and Sorrows; Salem Schools; Shops and Shopkeepers; Notables; and The Grandmother. M.C.D. carried on a long personal correspondence with abolitionist Lydia Maria Child and her personal photograph album, compiled in 1861, contains everything from soldiers (many family members), politicians (including Abraham Lincoln) and her children and grandchildren. An uncommon book, especially signed by Silsbee. 12mo., pictorial off-white cloth, stamped in brown; 120 pages. Good (covers & spine have some soiling; some light dampstain to lower portion text, more so to the front and back pages). (Inventory #: 57288)
$125.00 add to cart or Buy Direct from Antic Hay Books
Share this item
Antic Hay Books
Offered by