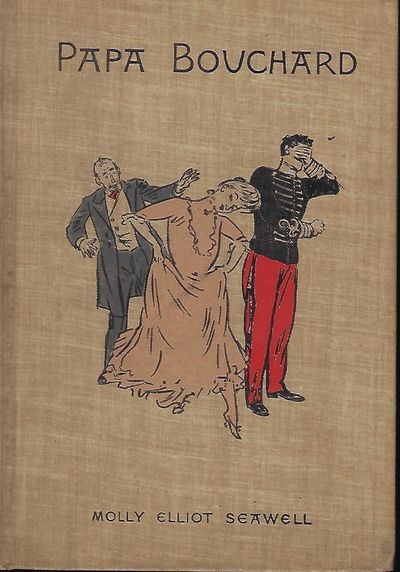 by SEAWELL, Molly Elliot
NY: Charles Scribner's Sons, 1901. First Edition. With a signed inscription by Seawell tipped on a small card to the front endpaper: "It is the dream of my life to see Papa Bouchard on the stage. Molly Elliott Seawell." A portion of a typed page is also tipped to the same page" Papa Bouchard enjoys the distinction of having been pirated by the present Marquis of Hertford, when he was known as Eric Hope. He not only stole the book and produced a dramatic version of it in London, but claimed to be its writer." The typed message says that Seawell took the matter to court, which helped result in the present British copyright law where foreign works are protected. With the bookplate of the Authors Club Library on the front pastedown, signed by George Wharton Edwards. George Wharton Edwards [1859-1950) was an American Impressionist painter and illustrator, and the author of several books of travel and historical subjects. He was a member of the Authors Club and may have designed this bookplate. Or, he may be responsible for placing the book into the library. Molly Elliot Seawell [1860-1916] was an early American historian and writer. She was the niece of U.S. President John Tyler. Her 1891 essay "On the Absence of Creative Faculty in Women" attracted more attention than any of her books. Women answered it, and the discussion was joined by Andrew Lang, Thomas Wentworth Higginson, and others. The Critic said that essay attracted more attention than any single article ever published in its columns. 12mo., pictorial tan cloth, stamped in black, red & light brown, top edge gilt; 261 pages. Illustrations by William Glackens. Very Good (front cover bright but some soil rear cover and little spine; contents clean & tight). (Inventory #: 57289)
$100.00 add to cart or Buy Direct from Antic Hay Books
Share this item
Antic Hay Books
Offered by