Whims and Oddities, in Prose and Verse; with eighty-seven original designs. A new edition. 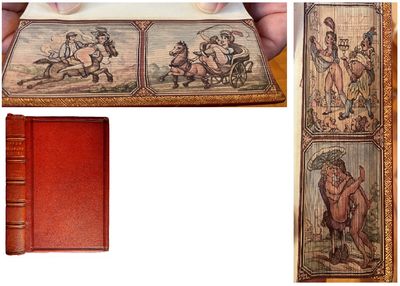 by [Fore-edge Painting] HOOD, Thomas (1799-1845).
London:: Edward Moxon, 1860., 1860. Small 8vo. viii, 310 pp. Original full reddish-brown blind-stamped morocco, with gilt spine title, all edges gilt; slightly rubbed. The added thumb-holed brown cloth slip-case is made by Frost at the time of his painting. Very good. DOUBLE FORE-EDGE PAINTING WITH EROTIC SCENES, SIGNED BY THE ARTIST: With a double fore-edge painting showing bawdy ("and athletic") erotic scenes, painted by Martin Frost, signed with both his initials, and containing his handwritten colophon at rear, dated 1999. Frost has painted two side-by-side fore-edges, giving four vignettes in all: "Four scenes of athletic and ingenious lust" The first side shows a copulating man and woman on either a horse or on a carriage drawn by a horse, after Thomas Rowlandson's works. Frost's initials are found on the lower right of this side. The reverse side shows two vertical vignettes depicting coitus on a bike (rather an imaginary wheeled chair with parasol (note the erect penis statue in the background)), and a stage scene with a partially nude woman lifting her skirt high to give a view of her genitals, and a happy pot-bellied man with a huge erect penis that balances a bowl and 3 goblets (he is talented!), his costume of the British stage, his genitals showing as if being the star of the show. An audience whoops it up in the gallies. Both characters sportingly wear a feather in their hair or cap. (Inventory #: FF2484)
$1,500.00 add to cart Available from
Jeff Weber Rare Books
Share this item