The Cat and the Moon and Certain Poems 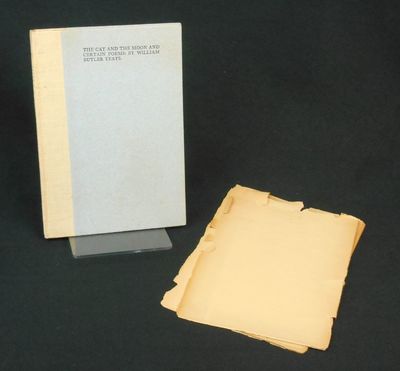 by Yeats, W.B.
Merrion Square, Dublin, Irland: The Cuala Press [Elizabeth Corbet Yeats], 1924. First and Limited Edition. Hardcover. Near fine/poor. First printing of this collection, one of 500 copies, octavo size, 51 pp., signed by Yeats. William Butler Yeats (1865-1939) is acknowledged by many as "supreme among modern Irish poets". He was awarded the Nobel Prize in Literature in 1923 (the first Irish to be so recognized), at which time he was "one of Dublin's great established figures, both in his own right and as the representative of the cultural renaissance which...had set in motion the Irish revolution and war of independence." Throughout his life, and throughout his poetry - which is still read and loved today - Yeats is recognized as supremely Irish, with his life and poetry reflective of his Irish identity.

This book of mostly poems, as well as a short, one-act play "The Cat and the Moon", was dedicated to Lady Gregory (Isabella Augusta, Lady Gregory (1852-1932)) who, with Yeats and Edward Martyn, co-founded the Irish Literary Theatre and the Abbey Theatre. Several of the poems appeared in print previously in various publications such as "The Dial"; in the Preface, Yeats states: "[n]ow that I have just read through the poems in this little book, I renew an impression...- an odour, a breath, that suggests to me Indian or Japanese poems and legends..."

Contains the poems "Youth and Age", "Leda and the Swan", "Meditations in time of Civil War", etc. Of interest are the notes Yeats includes at the end explaining at times certain lines, at times his inspiration to write certain of the works, but always giving a glimpse into the poet's mind.

___DESCRIPTION: Bound in full laid blue paper over boards with a buff linen spine, black lettering debossed on the front board, paper spine label with black lettering, all edges uncut, blue endpapers matching the binding, title page with woodcut of a unicorn in red by Robert Gregory, signature of Yeats in black ink underneath the book's title on the title page, most of the signatures are unopened, colophon in red, one of 500 copies (unnumbered); printed on paper made in Ireland, octavo size (8 1/2" by 5 5/8"), pagination: [i-viii] [1] 2-41 [1 blank] [colophon]. With the original plain paper wrapper.

___CONDITION: Near fine, with clean boards, the linen spine clean and unworn, perfectly straight corners without rubbing, a strong, square text block with solid hinges, the interior is clean and bright, and entirely free of prior owner markings; some of the usual offsetting on the endpapers and a couple gutters just beginning to crack, else fine. The paper wrapper poor, most of the spine portion missing so the two panels and flaps are in separate pieces, light vintage pencilled notations on the back panel.

___Swan's Fine Books is pleased to be a member of the ABAA, ILAB, and IOBA and we stand behind every book we sell. Please contact us with any questions you may have, we are here to help. (Inventory #: CNIK17)
$1,375.00 add to cart or Buy Direct from
Swan's Fine Books
Share this item

King of the Road

New York : A Rutledge Book, Macmillan Publishing Co., Inc , 1977
(click for more details about King of the Road)
View all from this seller>