Heaven's Not Far Away 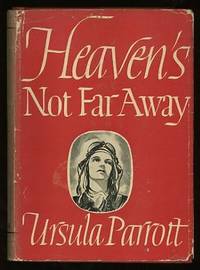 by Parrott, Ursula
New York: Dodd, Mead & Company. Very Good in Very Good- dj. 1942. First Edition. Hardcover. [moderate shelfwear, spine turned, ffep removed, long-ago seller's price stamped on front pastedown, previous owner's initials at upper corner of half-title page; jacket edgeworn, rubbed/scuffed, a few tiny small tears, spine faded (text still readable, but faint)]. Very scarce novel about a young aviatrix. "When Valery Bennett decided to spend her inheritance on flying lessons, she was still young enough to act pretty spoiled and arrogant, and she wasn't exactly the most beautiful girl in the world. So, although she was an alert and enthusiastic pupil, she wasn't very popular at the Field. But a young friend of the family's saw the possibilities in Valery and proceeded to be as frank with her as few friends would. Before two months had passed, she was another girl -- which led to a complicated situation among these two young people, Valery's instructor, and an older girl flyer." The author, several of whose earlier works were adapted for movies, was herself a licensed pilot (it sez here), and "writes with unusual understanding about the excitement of handling a plane [and] the deep and lasting bonds that form among those who fly." . (Inventory #: 12138)
$100.00 add to cart Available from ReadInk
Share this item
ReadInk
Offered by

New York : Simon and Schuster , 1950
(click for more details about The Golden Tag)

False Starts: A Memoir of San Quentin and Other Prisons

Boston : Little, Brown and Company , (c.1976)
(click for more details about False Starts: A Memoir of San Quentin and Other Prisons)
View all from this seller>