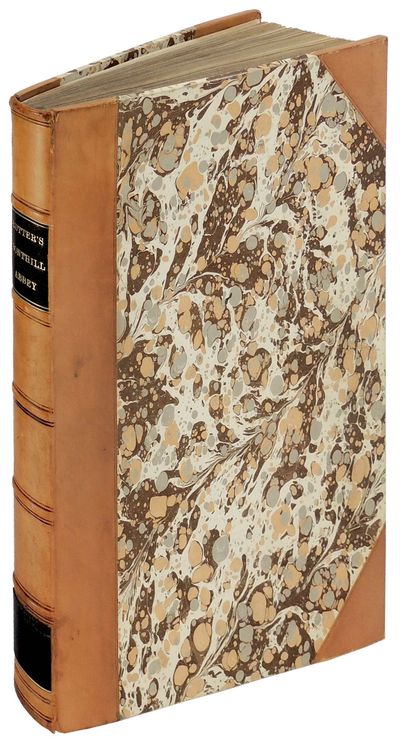 by Rutter, John
Shaftsbury and London: by the author / Charles Knight and Co., Longman, Hurst, and Co., et. al, 1823. Hardcover. Very Good. Hardcover. Fonthill Abbey was an extravagant neo-gothic country home built on William Beckford's Fonthill Gifford estate in Wiltshire between 1796 and 1813. In 1771, the 10 year old Beckford inherited a vast sum of money from his father and once he reached his majority, began to pursue a lavish lifestyle. Following a scandal involving William Courtenay in 1784, Beckford fled into exile in Europe. Upon his return to Britain, Beckford hired the renowned architect James Wyatt, uncle of Jeffry Wyatville to design his new home. The house was arranged in a cruciform pattern with a large octagonal space in the center which supported an enormous cathedral-like tower. Following numerous delays and tower collapses, in 1813, Beckford declared the house complete. In paying for the venture, Beckford squandered vast sums of money and the haste with which the construction was finally completed meant that the building was incredibly unstable. In 1822, the house and estate was sold to the Scottish arms dealer James Farquhar and Beckford settled in Bath where he died in 1844. The central tower collapsed for a third time in 1825 and badly damaged part of the building. Following this, the house was abandoned and eventually demolished. This book, printed shortly after Farquhar's purchase of the estate describes the house as it was before the collapse. It is apparent from the text that the building was an impressive structure and contained several valuable works of art. [Royal Collection Trust]. In an attractive modern binding of three quarter tan leather over marbled paper covered boards with black and gilt title label to spine. Rubbing and a few small chips to leather on spine ends, edges, and corners. Bookplate of Lothar Strauss to front pastedown. Ex-library embossed stamp to title page, partially removed / debossed. Evidence of removed bookplate to rear free endpaper. Includes chapters on the interior of the abbey (with notes on paintings and furniture), exterior, a walk within the barrier, a walk without the barrier, and a ride through the domain; as well as, three appendices covering: historical notices, memoranda on the origin and progress of the abbey, and genealogical tables of William Beckford, Esq. A list of subscribers is also included. Illustrated with 13 plates including color frontis, color half-title page, one additional color plate, folding map of Fonthill, and 10 uncolored plates as well as numerous wood cut vignettes. Creasing to bottom corners of several pages. Occasional small spots of soiling / smudge marks to margins and very light foxing, but clean and bright overall. Folio. 127 pages plus plates. ARCH/010721. (Inventory #: 34783)
$900.00 add to cart or Buy Direct from
Kelmscott Bookshop
Share this item

The History of Reynard the Foxe

Hammersmith : Kelmscott Press , 1892
(click for more details about The History of Reynard the Foxe)

The Vision of William Concerning Piers the Plowman

New Rochelle, NY : Elston Press , 1901
(click for more details about The Vision of William Concerning Piers the Plowman)
View all from this seller>