U C 1868 - 1968 The Department of English of the University of California on the Berkeley Campus; An informal presentation of some of its personalities and activities during its first century 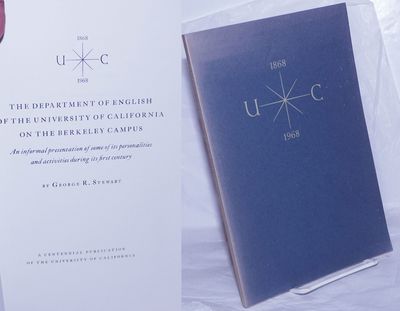 by Stewart, George R.
Berkeley: A Centennial Publication of the University of California, 1968. Paperback. Unpaginated preliminaries, 67p., softbound in 10x7 inch plain printed grey-blue wraps. includes several vignette photoportraits and a list of books published by department writers, Stewart's own not least, one of UCB's finest. Covers marginally sunned, with spine panel turned totally grey; an else good copy, sound, clean and unmarked. Stewart says Mark Schorer inaugurated this book-as-project, trusting that the GRS "crotchetyness" might turn out a readable book; and indeed it did. There was a long period of low and lower morale in the department mentioned vividly, a depth that apparently could be traced to Depression years, but also manifested in earlier decades, with one English prof quitting mid-semester to complain to Sacramento authorities. That prof, Wm Swinton, was a friend of Mark Twain (in the 1860s, "not a boast") and of Walt Whitman ("a definite liability"). Colorful stuff despite booklet's dreary title. Stewart confesses this to be an "informal little book" basically "autobiographical in nature." Writing amidst FSM years may have loosened his tongue. (Inventory #: 260167)
$15.00 add to cart or Buy Direct from Bolerium Books
Share this item