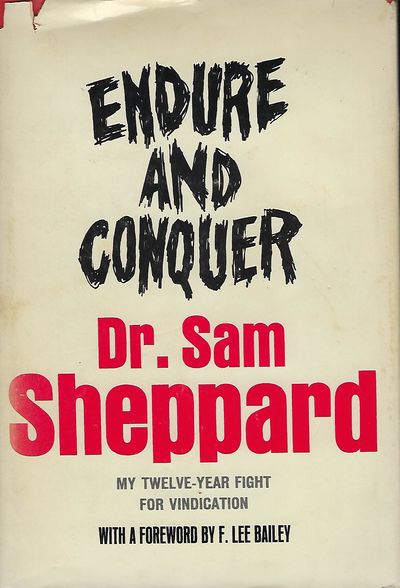 by SHEPPARD, Dr. Sam
Cleveland: The World Publishing Company, 1966. First Edition, second printing. Signed presentation from Sheppard on the front endpaper: "To Phyllis, Dr. Sheppard." Also signed by his second wife, Arianne, who also has an interesting history. Samuel Holmes Sheppard [1923-1970] was an American neurosurgeon. He was exonerated in 1966, having been convicted of the 1954 murder of his wife, Marilyn Reese Sheppard. The case was controversial from the beginning, with extensive and prolonged nationwide media coverage. The U.S. Supreme Court determined that the "carnival atmosphere" surrounding Sheppard's first trial had made due process impossible; after ten years in prison he was acquitted at a second trial. The television series "The Fugitive" and the 1993 film of the same name have been cited as being loosely based on Sheppard's story. This claim has always been denied by their creators. Tall 8vo., orange cloth, stamped in gilt, in dust jacket; 329 pages. Foreword By F. Lee Bailey.. Very Good (covers nice with minor wear; contents clean & tight); good (several chips & short tears) d/j. (Inventory #: 57303)
$65.00 add to cart or Buy Direct from Antic Hay Books
Share this item
Antic Hay Books
Offered by

Garden City, NY : Doubleday & Company , 1961
(click for more details about OUR EMERGING UNIVERSE)
View all from this seller>