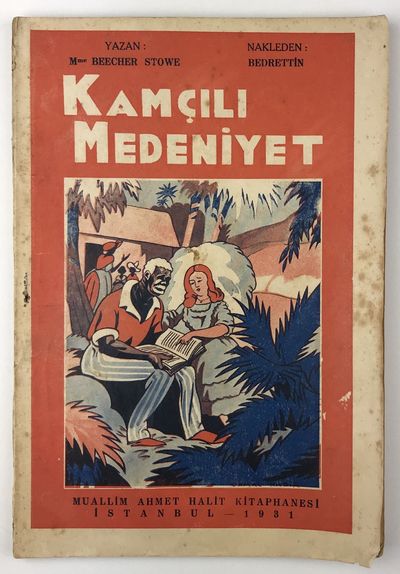 by Stowe, Harriet Beecher
Istanbul, 1931. About very good.. 83,[1]pp. Illustrated. Original pictorial printed wrappers, printed in blue, brown, and orange. Light wear, spine and corners chipped, covers lightly soiled. Dampstain to lower edge of text block; text lightly toned and foxed. The first Turkish edition of Harriet Beecher Stowe's classic work. Originally published as a two-volume work in 1852, Uncle Tom's Cabin was a smash hit, selling 10,000 copies in its first week and 300,000 copies in its first year. It was far and away the best-selling work of the 19th century, topped only by the Bible. It has since been translated into more than seventy languages, including more unusual choices such as Turkish and Welsh, and was the first American novel translated into Chinese. The present edition, published in an abridged format, is a slim octavo with numerous sketch-style illustrations. The cover depicts Uncle Tom and Eva sitting amongst tropical foliage outside a cabin, and Eva is teaching Tom to read. Uncle Tom is printed in shades of brown and black, and has a distinctly ape-like appearance, while Eva is printed in a peach color and has far more normally proportioned features. Rare. We locate one copy in OCLC, at Bogazici University in Turkey. (Inventory #: 1764)
$750.00 add to cart Available from
McBride Rare Books
Share this item

Five Years a Captive Among the Black-Feet Indians: or, A Thrilling Narrative of the Adventures, Perils and Suffering Endured by John Dixon and His Companions..

Columbus : Osgood & Pearce , 1858
(click for more details about Five Years a Captive Among the Black-Feet Indians: or, A Thrilling Narrative of the Adventures, Perils and Suffering Endured by John Dixon and His Companions..)
View all from this seller>