[Archive of Correspondence Relating to Missionary Work on the Wind River Indian Reservation, 1885-1909] 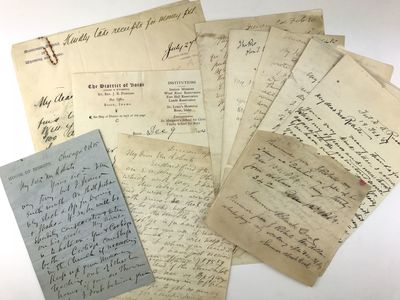 by [Wyoming]. [Roberts, John]
[Wyoming, 1909. Very good.. Ten letters and one receipt, [17]pp. total. Mostly octavo sheets. Light wear and soiling, heavier to one or two pieces. A small but informative archive of manuscript letters to Reverend John Roberts, Episcopal missionary to the Shoshone and Arapahoe Indians on the Wind River Reservation in Wyoming. Born in Wales in 1853, Roberts was the first clergyman sent to the reservation, which had been created by treaty with the Shoshone people in 1868. He arrived in 1883 and remained until his death in 1949.

The archive includes eleven items: ten letters to Roberts and an 1889 receipt acknowledging payments by Roberts to Sumner Black Coal -- an Arapahoe man who had been educated at the Carlisle Indian School and became an assistant teacher at Wind River. Five of the letters are from Rev. John Franklin Spalding, Missionary Bishop of Colorado; two are from Rev. Ethelbert Talbot, Missionary Bishop of Wyoming and Idaho; two are from Rev. J.B. Funsten, who succeeded Talbot; and one is from George H. Sands, then a Major in the U.S. Cavalry and the commanding officer at Fort Washakie (Wyoming). Most of the correspondence deals with business matters relating to staffing and financial support for the work of the mission. Several letters make reference to Sherman Coolidge, a full-blooded Arapaho priest who had been separated from the tribe as a young boy and raised on a military post. He became Roberts' assistant in 1884. In letters from 1885 and 1886, Spalding asks Roberts about Coolidge's progress learning the Arapahoe language, notes with approval that Coolidge seems to be helpful to Roberts, but also asks whether he is able to stay out of debt. In a letter expressing concern about the status of the mission once a new Bishop is appointed for Wyoming and Idaho (moving Wind River out of his own jurisdiction), Spaulding suggests that Coolidge can "sleep in the church if necessary."

A decade later, in 1896, Talbot reports to Roberts that Coolidge has succeeded in raising some funds while in New York and will be returning home soon. Talbot's other letter describes his plans to visit the reservation with his family ("the ladies wish to see the Indians, to bathe in the sulphur hot springs, and above all to fish and have a good time") and promises to attend to various business matters while he is there.  The two letters from Funsten (1904 and 1909) both reference Roberts' interest in founding a hospital in Lander, Wyoming -- a project that came to fruition in 1912. Finally, the letter from Major Sands responds to one from Roberts which must have expressed thanks for aid provided to him when, in February 1907, "a group of Arapaho, frustrated by the Indian Bureau's ban on their annual Sun Dance religious ritual, began pursuit, clearly intending to murder him. Roberts retreated to Lander, and telephoned the commanding officer at Fort Washakie, the former Camp Brown. Troops escorted him home" (Wyoming State Historical Society Encyclopedia).  Sands assures Roberts that "my officers and men thoroughly appreciate the gratuitous service you have rendered there for years and I hear many hearty expressions of affection for you on this post.  Indeed, when it was heard that you were alarmed, there were many volunteers to guard your house. So yours has been a labor of love repaid in kind."

A wonderful group, illuminating life and trials on Wind River Reservation at the turn of the century. (Inventory #: 1665)
$650.00 add to cart Available from
McBride Rare Books
Share this item

Five Years a Captive Among the Black-Feet Indians: or, A Thrilling Narrative of the Adventures, Perils and Suffering Endured by John Dixon and His Companions..

Columbus : Osgood & Pearce , 1858
(click for more details about Five Years a Captive Among the Black-Feet Indians: or, A Thrilling Narrative of the Adventures, Perils and Suffering Endured by John Dixon and His Companions..)
View all from this seller>