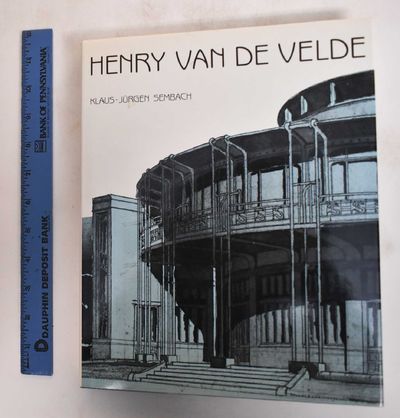 by Sembach, Klaus-Jurgen and Henry Van de Velde
New York: Rizzoli, 1989. Hardcover. VG/VG (ex-library with labels and stamps on spine, block, inside front and rear covers and title page verso. Pages are clean and clear. Binding is tight.). Blue cloth over boards with gilt lettering on front and spine; white dust jacket, color illustration and black lettering; 227 pp; 320 illustrations, 10 in colour. "One of the most important figures in the design world of the early part of this century. Henry van de Velde (1863-1957) successfully spanned the disciplines of architecture, interior design, painting, furniture, ceramics and metalware, and even typography and clothing. His work continues to fascinate through its originality, intelligence and strength of concep. Initially inspired by the Arts and Crafts movement in England, van de Velde was a passionate advocate of the spread of good design to a wider public Sembach, who knew van de Velde personally, investigates the most important aspect of his work: his architecture, which - although perhaps less well known than van de Velde's other achievements - was the motivating force behind much of his oeuvre. This comprehensive survey includes more than 300 illustrations to demonstrate how van de Velde's principles of structural honesty, logic of design and importance of line were translated into reality."--Jacket. (Inventory #: 182006)
$38.00 add to cart or Buy Direct from Mullen Books
Share this item