The Wallace Collection: A Complete Illustrated Catalogue of Paintings 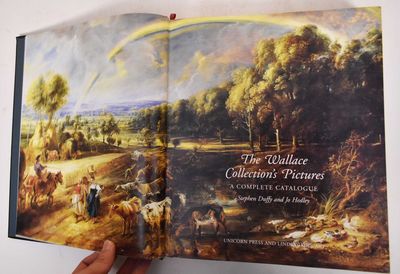 by Duffy, Stephen; Jo Hedley
London: Unicorn Press and LIndsay Fine Art, 2001. Hardcover. VG cover shows shelf wear. Blue cloth boards with gilt lettering on spine. 515 pages : illustrations (chiefly color). "The Wallace Collection opened to the public as a national museum in 1900. It has acted as a catalyst for enthusiastic collectors and provided a rich source of research for art historians. The pictures in particular have long been regarded not only as one of the most important collections in the world, but also as one of the best loved." "Collected between the 1780s and the 1880s by successive generations of the Marquesses of Hertford and the 4th Marquess's illegitimate son, Sir Richard Wallace, the picture collection exhibits a unique character of leisured opulence seasoned with an exquisite sensuality. Today there are 775 paintings, drawings and watercolours to be seen at Hertfeld House, including some of the most famous images of European art such as Hals's The Laughing Cavalier and Fragonard's The Swing. In England the Wallace Colection's array of Old Master paintings is surpassed only by those in the National Gallery and the Royal Collection, while the collections of French painting of the eighteenth century and the period 1820-60 are rivalled only by the greatest collections in France and Russia." "Here, for the first time in the Collection's history, all its pictures are reproduced together in colour, with the latest information concerning their attribution. In addition, insight is afforded into the collecting history and motivations of the Seymour-Conway family who amassed one of the greatest of all private collections and whose personalities helped to shape the distinct character the Wallace Collection has today."--Dustjacket. (Inventory #: 181940)
$45.00 add to cart or Buy Direct from Mullen Books
Share this item