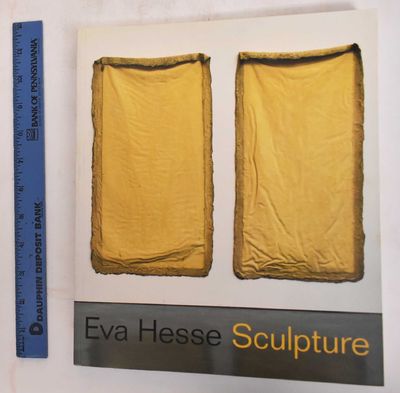 by Sussman, Elisabeth; Eva Hesse; Fred Wasserman; et al.
New York/ New Haven: Jewish Museum / Yale University Press, 2006. Softcover. VG. White and gray wraps, color illustrated, black and yellow lettering; xiii, 177 pp; profusely illustrated in color and bw. "Published in conjunction with the exhibition Eva Hesse: Sculpture, organized by the Jewish Museum and presented from May 12 to September 17, 2006"--Title page verso "The work of sculptor Eva Hesse (1936-1970), one of the greatest American artists of the 1960s, continues to inspire and to endure in large part because of its deeply emotional and evocative qualities. Her latex and fiberglass sculptures in particular have a resonance that transcends the boundaries of minimalist art in which she had her roots. Hesse's breakthrough solo exhibition - Chain Polymers at the Fischbach Gallery in New York in 1968 - was a turning point in postwar American art. "Eva Hesse: Sculpture" focuses on the artist's large-scale sculptures in latex and fiberglass and provides a rare opportunity to look at Hesse's artistic achievement within the historical context of her life in never-before-seen family diaries and photographs. Essays consider Hesse's art from a variety of angles: Elisabeth Sussman discusses the sculptures shown in the 1968 solo exhibition; Fred Wasserman delves into the Hesse family's life in Nazi Germany and in the German Jewish community in New York in the 1940s; Yve-Alain Bois examines Hesse's works within the context of the art and aesthetic theories of the 1960s; and Mark Godfrey analyses the importance of Hesse's celebrated hanging sculptures of 1969-70. In addition to colour reproductions of the artist's sculpture, the book features a copiously illustrated chronology of the artist's life." - publisher's description. (Inventory #: 181923)
$50.00 add to cart or Buy Direct from Mullen Books
Share this item