UNCLE TOM'S CABIN; or, Negro Life in the Slave States of America 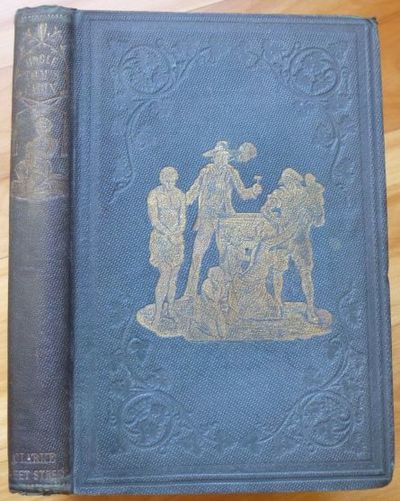 by Stowe, Harriet Beecher
1852. [the first English edition] Reprinted verbatim from the tenth American edition. London: Clarke and Co., 1852. Original blind-stamped grey-green cloth with gilt vignettes on the front cover and spine. First English Edition, which includes a four-page Preface "introducing this good book to British readers" -- signed simply by "G". Jewett's two-volume American edition (with the different sub-title "Life Among the Lowly") came out in late March 1852, and due to its instant success, many printings ("editions") were run off over the following weeks. Blanck (BAL) states that this unillustrated "Clarke and Co." edition, "reprinted verbatim from the tenth American edition," was "the earliest English edition identified by BAL" -- published on either April 30th or May 1st, and with a copy deposited at the British Museum (now Library) on July 12th. (BAL does also note that the earliest Clarke ads for this book cited "300 pages," not the actual 329 pages: if there was an earlier Clarke state, no one has seen it, so 300 was more likely Clarke's pre-publication estimate of the book's length.) Cassell's edition illustrated by George Cruikshank, often cited as the first UK edition, did not come out until the fall -- 13 weekly parts starting on October 23rd, followed by the book edition in late December or in early January 1853. (Hildreth gets this wrong -- saying Cassell's 13 parts constituted the first UK edition, followed by this Clarke one.) Other late-1852 UK editions -- it was a free-for-all -- include London ones by Bosworth (the only UK publisher actually to pay Mrs. Stowe), by Passmore Edwards, by J. Gilbert, by Ingram Cooke & Co, by Lea, by Lloyd, by Partridge & Oakey, by Piper Bros. & Co., by G. Routledge & Co., by Simms & M'Intyre, by J. Snow, by G. Vickers, and by Gall & Inglis of Edinburgh -- in addition to a subsequent "C.H. Clarke & Co." edition that included illustrations. This is a remarkably near-fine copy (just a trace of wear at some extremities, rear endpaper slightly cracked, cover gilt less than bright). Blanck 19518; Hildreth pp 8-11. (Inventory #: 14645)
$2,250.00 add to cart or Buy Direct from
Sumner & Stillman
Share this item

THE AWKWARD AGE. A Novel

1899
(click for more details about THE AWKWARD AGE. A Novel)