Elder Northfield's home; or, sacrificed on the Mormon altar. A story of territorial days in Utah. Second edition 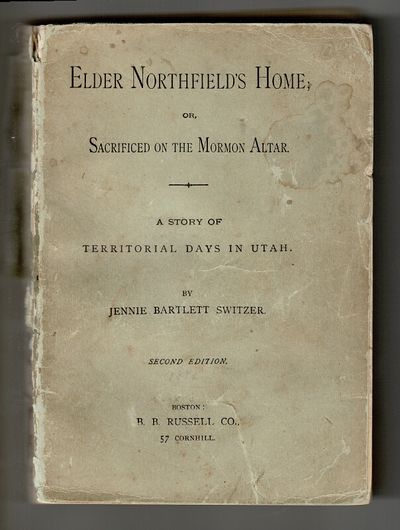 by Switzer, Jennie Bartlett
Boston: B. B. Russell Co, 1894. 8vo, pp. [3], 6-319, [1]; printed self-wrappers, rear wrapper wanting; spine largely perished; stitching sound. Title page inscribed "with love and best wishes of the author." Originally published by J. Howard Brown Co. circa 1882 with the subtitle, A story of the blighting curse of polygamy. "The practice of plural marriage, commonly known as polygamy, stirred intense controversy in postbellum America until 1890, when the Church of Jesus Christ of Latter-day Saints first officially abolished the practice. Elder Northfield's Home, published by A. Jennie Bartlett in 1882, is both a staunchly antipolygamy novel and a call for the sentimental repatriation of polygamy's victims. Her book traces the fate of a virtuous and educated English immigrant woman, Marion Wescott, who marries a Mormon elder, Henry Northfield. Shocked when her husband violates his promise not to take a second wife, Marion attempts to flee during the night, toddler son in her arms and pulling her worldly possessions in his toy wagon. She returns to her husband, however, and the balance of the novel traces the effects of polygamy on Marion, Henry, and their children; their eventual rejection of plural marriage; and their return to a normal and healthy family structure." (University of Nebraska Press) Wright III 5347. (Inventory #: 57846)
$115.00 add to cart or Buy Direct from
rulon-miller books
Share this item