The unity of human nature 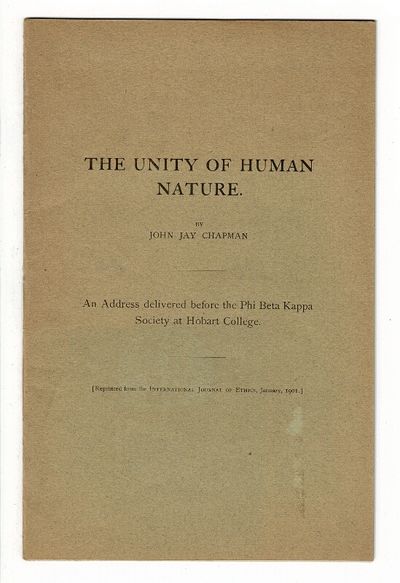 by Chapman, John Jay
[New York, 1901. Reprinted from the International Journal of Ethics, January 1901; 8vo, pp. 10, [2]; original green printed paper wrappers, edges lightly toned, fine. An address delivered before the Phi Beta Kappa Society at Hobart College. On the interconnectedness of all human society, and the need for young men to effect change insistently early on in their lives. Chapman was a prolific essayist, speaker, and social reformer. "His work is marked by originality and felicity of expression, and the opinion of many critics has placed him in the front rank of the American essayists of his day" (Wikipedia). His attitude was staunchly progressive, and he spoke out against racialized lynchings and in support of radical abolitionists such as William Lloyd Garrison, with whom his grandmother, Maria Weston Chapman, was a close associate. In this speech he criticizes Americans who might recoil at the presence of Chinese immigrants and argues for a mutual exchange of ideas. Chapman was much respected by his contemporaries, but never widely read, and most of his work has long been out of print. (Inventory #: 57852)
$40.25 add to cart or Buy Direct from
rulon-miller books
Share this item