Indian Pottery Old and New--Woodcuts and Text by Gustave Baumann 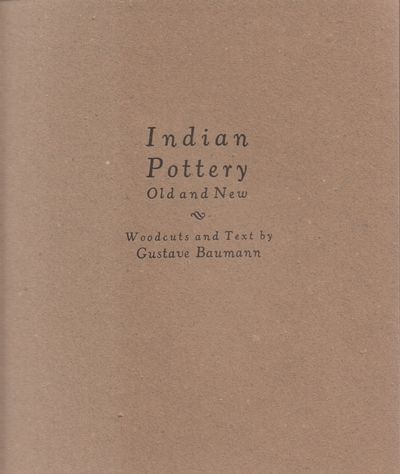 by Baumann, Gustave
Santa Fe, NM: Press At the Palace of the Governors. New with no dust jacket. 2020. Limited Edition. Hardcover. Brown hardcover sleeve with paste-down label. Hand-bound string-tied booklet with letterpress title on front wrapper and facsimile letterpress design on back wrapper from the original Baumann designed book from 1919. New. 145 copies printed. An entry in the December 31,1919 issue of El Palacio magazine reported an exhibit of woodcut prints by Gustave Baumann. On display were pages of what the article called a “wonder book, ” Indian Pottery Old and New, said to have been printed in an edition of 50 copies. That showing, and another in Chicago in 1920, were the last times the work was seen in public, and the book was little-known to collectors and admirers of Baumann’s work for nearly a century. Only a few of the fifty copies planned for that 1919 edition were completed, and no more than a dozen are found today in museum, library or private collections. In 1937 Baumann worked on a much-expanded version, and as late as 1950 he still spoke of his intent to bring out a book on Southwestern Indian pottery. So, like the book’s title, we present a book by Gustave Baumann that is both old and new. It is yet another display of the artist’s wit, ever-sharp eye and sure hand. The block-book style text and fifteen woodcut studies of Indian pottery were carved within a year of Baumann’s arrival in Santa Fe, and we have followed the design of the booklet as he first conceived it. Variations in its black-only format were suggested by changes in his 1937 prototypes, most notably the introduction of brown background blocks carved for all of the pottery groupings. Those blocks, now in the collection of the New Mexico History Museum, are printed here for the first time. Many of the pots, so skillfully rendered, are in the collections of the Museum of Indian Arts and Culture and the School for Advanced Research. One hundred forty-five copies of the book were printed by Thomas Leech and James Bourland on Baumann’s remaining supply of Arak paper made by the Whitehead and Alliger Company. That a ream of this paper remained at the time of his death in 1971 may indicate that he had been saving the paper for this very project. Handmade paper covers by Thomas Leech include Baumann’s mouse-chewed canvas tool belt (too far gone to restore) , New Mexico mica, and recycled paper trimmings from some of Baumann’s other papers. The 28-page soft cover book measures 6.75 by 8 inches and comes in a hard-cover folder made by Rosalia Galassi. Number 97 of 145. ; Woodcuts; 8vo 8" - 9" tall; 28 pp . (Inventory #: 022237)
$250.00 add to cart Available from
Back of Beyond Books
Share this item