WHO CONQUERED CALIFORNIA? The Conquest of California By The Bear Flag Party or A BIOGRAPHICAL SKETCH OF THE LIFE OF WILLIAM B. IDE 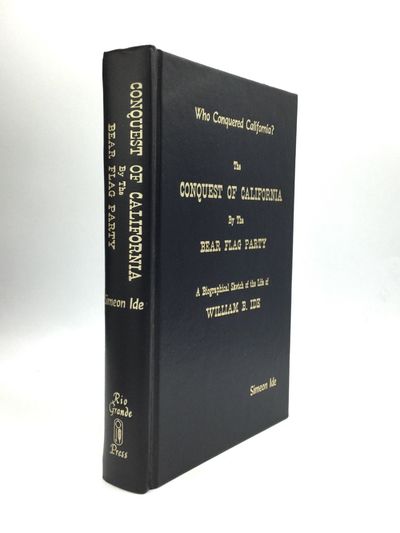 by Ide, Simeon
Glorieta, New Mexico: Rio Grande Press, 1967. Hardcover. Very Good. Facsimile reprint of the 1880 first edition. Simeon Ide, in assembling and printing these "scraps of history" about William Brown Ide, wanted to establish his brother's place in history. He believed that too much credit and attention had been given to John C. Fremont. For a short-lived period of twenty-two days, William Ide, one of the leaders of the famed Bear Flag Revolt of June 14, 1846, became "Commander-in-Chief" of the California Republic. Even with its adulatory, self-serving purpose, Simeon's book contains a wealth of firsthand information on the activities of the Bear Flaggers, the capture of Sonoma and General Mariano Vallejo, establishment of a so-called republic, and the final conquest of California by the United States with the aid of a group of hardened, roughneck volunteers known as the California Battalion under Fremont. Foreword by Ronald Reagan. Introduction by Benjamin Franklin Gilbert. Octavo. Original black buckram binding, with gilt titles. Issued without a dust jacket. Better than very good. Zamorano Eighty 45. (Inventory #: 72633)
$60.00 add to cart Available from Johnson
Share this item

by Pal, Pratapaditya and Julia Meech-Pekarik