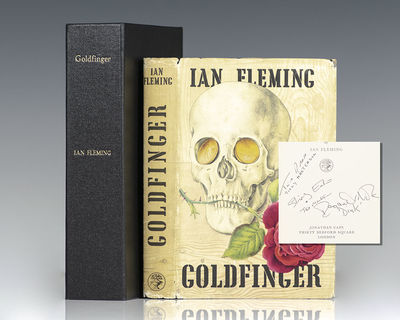 by Fleming, Ian
London: Jonathan Cape, 1959. First edition of the seventh novel in Ian Fleming's James Bond series. Octavo, original black cloth. Signed by three iconic actresses in Goldfinger on the title page, Margaret Nolan [Dink], Shirley Eaton [Jill Masterson/Golden Girl] and Tania Mallett [Tilly Masterson]. Very good in an excellent dust jacket with light rubbing, name to the front free endpaper crossed out. Jacket design by Richard Chopping. Housed in a custom clamshell box. An exceptional collection of signatures. Goldfinger originally bore the title The Richest Man in the World. Based upon American gold tycoon Charles W. Englehard, Fleming named his villain after British architect Erno Goldfinger. When the actual Goldfinger found out his name was being used, he threatened to sue Fleming, and the matter was ultimately settled out of court. A best-seller upon its release, it became the third James Bond film in 1964 starring Sean Connery. (Inventory #: 120459)
$4,000.00 add to cart or Buy Direct from
Raptis Rare Books
Share this item