Omnipotent Government: The Rise of the Total State and Total War. 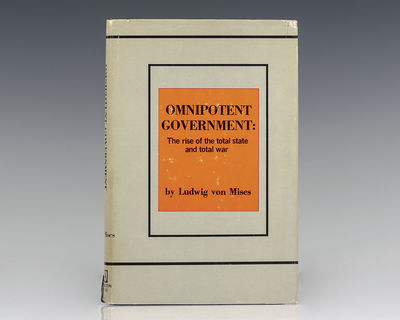 by von Mises, Ludwig
New Rochelle, NY: Arlington House Publishers, 1969. First edition of the re-issue of this classic work. Octavo, original cloth. Near fine in a near fine dust jacket, bookplate. Omnipotent Government is one of the most influential writings in Libertarian social thought and critique of statist ideology and socialism, examining the rise of Nazism as an example. The book treats Nazism as a species of orthodox socialist theory. At the same time the book offers a critique of economic interventionism, industrial central planning, the welfare state, and world government, denouncing the trends of the Western Allies towards the total state. (Inventory #: 120643)
$125.00 add to cart or Buy Direct from
Raptis Rare Books
Share this item