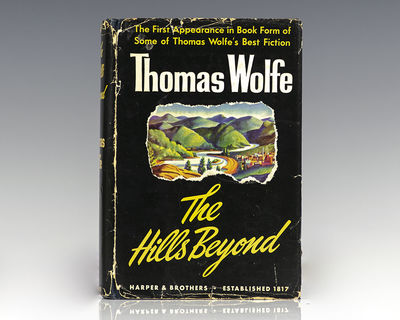 by Wolfe, Thomas
New York and London: Harper & Brothers, 1941. First edition Wolfe's acclaimed posthumously published short story collection. Octavo, original dark blue cloth. Fine in a very good dust jacket, embossed stamps. When Thomas Wolfe died, he left more than a million words in unpublished manuscript form, out of which Edward Aswell extracted The Web and the Rock, You Can't Go Home Again, and The Hills Beyond which contains some of Wolfe's best short stories including: The Lost Boy, Chickamanga, The Lion at Morning, and the title piece which was the last story the author wrote. (Inventory #: 120308)
$125.00 add to cart or Buy Direct from
Raptis Rare Books
Share this item