The Truth About Lorin Jones. 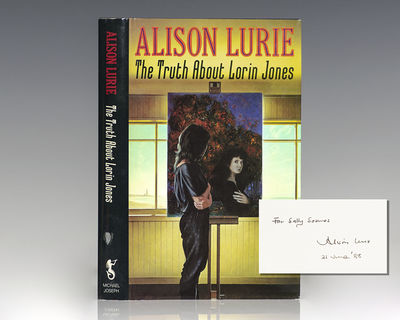 by Lurie, Alison
London: Michael Joseph, 1988. First edition of the author's artistic detective story. Octavo, original cloth. Association copy, inscribed by the author on the front free endpaper in the year of publication to photographer Sally Soames, "For Sally Soames Alison Lurie 21 June '88." The recipient, British photojournalist Sally Soames, worked for The Sunday Times from 1968 until 2000 and was highly regarded for her exclusively black and white portraits of many of the most prominent figures of the 20th century including Menachem Begin, Margaret Atwood, Margaret Thatcher, Sean Connery, Rudolf Nureyev, Alec Guinness and Andy Warhol. Soames, who was known to be a warm and personal journalist, performed extensive research on her subjects and developed intimate rapports with them during her process, resulting in striking and revealing portraits. In addition to the several world leaders Soames came to know and photograph, she captured the unique personalities of some of the world's most gifted authors, poets, and playwrights. She published two books of photographs during her lifetime: Manpower (1987) with text by Robin Morgan and an introduction by Harold Evans and Writers (1995) with a preface by Norman Mailer. Fine in a fine dust jacket. Jacket illustration by Mark Harrison. Author photograph by Nimm Roberts. In The Truth About Lorin Jones, Polly Alter, a single parent and compassionate feminist, researches the untimely death of painter Lorin Jones, only to be exposed to fast-paced worlds beyond her experience and her own difficult questions. "As chronicler of the life and work of brilliant artist Lorin Jones, Polly Alter - museum curator and would-be painter - at first has it all figured out. Lorin, left to die alone in Key West, was done in by the white, male art establishment. But as Polly's interviewing progresses, Lorin comes down from her pedestal, and her "villains" emerge as likeable persons; at the same time, some of the truths about Polly's life are shattered or realigned" )Library Journal). (Inventory #: 119500)
$175.00 add to cart or Buy Direct from
Raptis Rare Books
Share this item