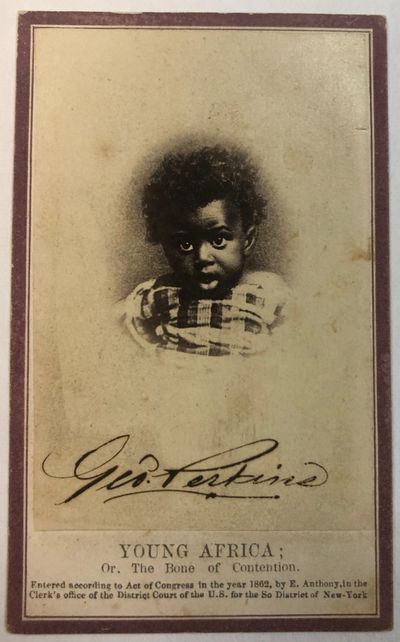 by [Perkins, George Napier]
New York: [Published by B. Anthony, Manufacturer of Photographic Albums], 1862. Vignette print of a young Black child, 2-1/2" x 4," entitled, "Young Africa: Or, The Bone of Contention" published by Anthony in 1862. The print, "intended as a commentary on slavery, the major cause of the American Civil War (1861-65)," is from a photograph by Matthew Brady. [Library of Congress description]. Light toning, Very Good.

Beneath the image the print is signed "Geo. Perkins." George Perkins [1842-1914] was a courageous Black lawyer and editor of the Oklahoma Guide, "the longest continuously published black urban weekly in Oklahoma Territory. He used the Guide, as editor and publisher, to enthusiastically defend the civil rights of blacks and attack the fear of black domination among whites." His signature is original and perhaps unique: the copy at the Library of Congress does not include it; the Clements Library description does not mention a signature; despite diligent efforts, we have not discovered a comparable signature.
Born in slavery in Tennessee, Perkins served in the Union Army during the Civil War, attaining the rank of first sergeant with Co. C, 57th USCT. After the War he attended law school and was admitted to the Arkansas bar. Perkins "was one of four African American delegates to the Arkansas Constitutional Convention, a two-term alderman on the Little Rock City Council, and justice of the peace for Campbell Township. He continued to pressure white Republicans for more African American participation and was an opponent of the pending Separate Coach Act of 1890. With its passage, Perkins migrated to Oklahoma." [Online OK Historical Society biography of Perkins.]
OCLC 890625809 [1- Clements] as of December 2020. Library of Congress online. (Inventory #: 37199)
$1,250.00 add to cart or Buy Direct from
David M. Lesser, Fine Antiquarian
Share this item
David M. Lesser, Fine Antiquarian Books LLC
Offered by