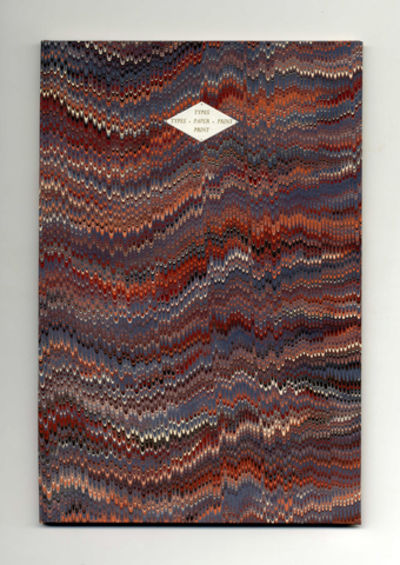 by Reuter, Will
Vancouver: Heavenly Monkey. As New. 2020. First Edition; First Printing; Signed by Author. Hardcover. A beautiful first printing of the first edition fresh off the press from Heavenly Monkey fine press publishers. This is one of 36 numbered copies, signed by author Will Reuter; These books were bound and boxed by Claudia Cohen. The sheets have been sewn into a folded handmade paper structure with gilt-stamped title label on the cover. Three of the sheets are fold-outs that were printed by the author in his studio. There are eighteen aphorisms on the theme of books from Reuter, the proprietor of The Aliquando Press with a long avocation for calligraphy. The project was conceived as an opportunity to collaborate across the 2,000 miles that separate Reuter's studio from that of Heavenly Monkey publishers. Similar in concept and execution to HM's An Alphabetic Accumulation, Will selected, designed and wrote out each aphorism to fill a (recto) page. These originals were then used to create polymer plates, for printing. Some elements - words and/or ornamentation - were omitted, and Will then added these to each sheet, thus every sheet includes some original calligraphic embellishment by him. The authors quoted in the collection are, in order of appearance, Helen Keller; Bohuslav Martinu; Stefan Zweig; (anonymous) ; George Santayana; William Morris; Martin Luther; Richard Rodriguez; Paul Auster; T. J. Cobden-Sanderson; Raul Mario Rosarivo; Rabbi Nachman; Joseph Conrad; Herman Koch; John Ruskin; William Blake; Francesco Petrarcca; and Tertullianus. Because Will shares HM's fondness for paper, a variety of hand- and mouldmades were used in the collection. Three of the aphorisms are fold-out sheets which were printed by Will at his studio in Ontario (the rest of the book being printed at HM with the handpress). ; 20 pages . (Inventory #: 28226)
$495.00 add to cart or Buy Direct from
Books Tell You Why
Share this item
Books Tell You Why, Inc.
Offered by

New York : Viking , 1962
(click for more details about Acceptance Speech The Nobel Prize For Literature, 1962 - 1st Edition/1st Printing)
View all from this seller>