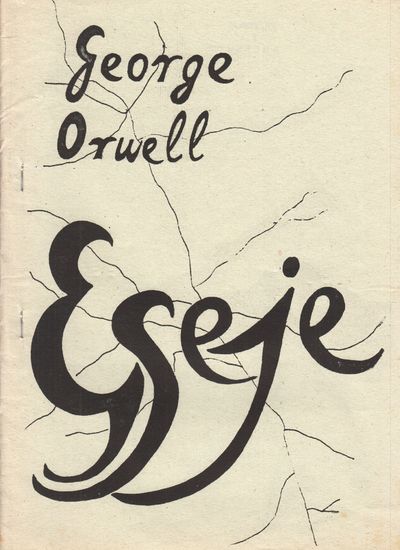 by Orwell, George and Andrzej K. Drucki (pseud. of Marcin Król), translator
[Krakow]: Wydawnictwo "Odnowa", [1981?]. Original side-stapled pictorial wrappers; 47, [1] leaves of mimeographed typescript to rectos and versos. Small tear to rear wrapper; last page loose. Still about very good. A samizdat collection of critical and literary essays by George Orwell, translated by the Polish political philosopher and historian Marcin Król (1944-2020). Orwell wrote a good deal about Poland during and after WWII, with his generally sympathetic tone (especially on the question of Polish refugees settling in post-war Britain) much appreciated and discussed in Polish circles. Król also provided the introduction to the collection, which originally appeared in the émigré political quarterly "Aneks" in an issue especially dedicated to Orwell (no. 6, 1974). At the time of publication most of the selected essays were appearing in Polish for the first time. Published in Paris/London 1973-1989, "Aneks" was founded by the Polish émigré generation of 1968 and was dedicated to creating "an independent journalistic forum for the intelligentsia in Poland and outside of it." Polish translations published in "Aneks" in London often served as base texts for underground reprints in Poland, as is the case with this edition.As of December 2020, KVK, OCLC show the copies at IISG Amsterdam, Connecticut, and Cornell. (Inventory #: 51111)
$275.00 add to cart or Buy Direct from
Bernett Penka Rare Books
Share this item