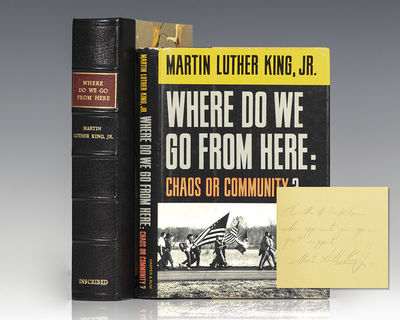 by King Jr., Martin Luther
New York: Harper & Row, Publishers, 1967. First edition of King's "last grand expression of his vision" (Cornel West). Octavo, original half cloth, illustrated with eight pages of black-and-white photogravures. Presentation copy, inscribed by the author on the front free endpaper, "To Mr. H.O. Wilson In appreciation for your great support Martin Luther King Jr." Fine in a near fine dust jacket. Jacket design by Ronald Clyne. Jacket photograph of Martin Luther King, Jr. by Bob Fitch. Housed in a custom half morocco clamshell box. Where Do We Go from Here is Dr. King's analysis of the state of American race relations and the movement after a decade of U.S. civil rights struggles. ''With Selma and the Voting Rights Act one phase of development in the civil rights revolution came to an end,'' he observed (King, 3). King believed that the next phase in the movement would bring its own challenges, as African Americans continued to make demands for better jobs, higher wages, decent housing, an education equal to that of whites, and a guarantee that the rights won in the Civil Rights Act of 1964 and the Voting Rights Act of 1965 would be enforced by the federal government. (Inventory #: 120468)
$17,500.00 add to cart or Buy Direct from
Raptis Rare Books
Share this item

New York : Doubleday, Page & Company , 1909
(click for more details about Abaft the Funnel.)
View all from this seller>