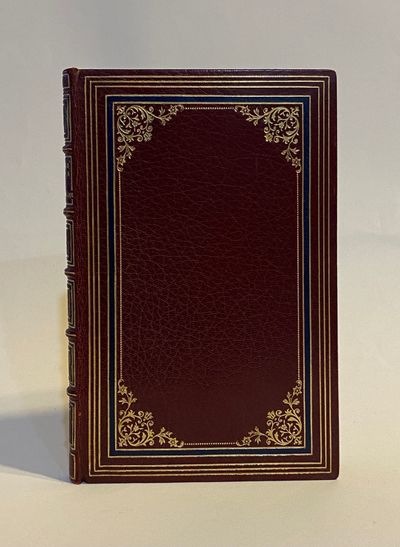 by Nodier, Charles; Leloir, Maurice
Paris: [Imprimerie Generale Lahure for]: Librairie de L. Conquet, 1894. 12mo. Contemporary burgundy levant morocco gilt extra by H.E. Laskine: triple gilt fillet around sides enclosing a blue morocco inlaid frame, turn-ins similarly gilt and inlaid, silk moire pastedowns and endpapers, the verso (and the recto opposite) of comb-marbled paper, original hand-colored wrappers bound in, top edges gilt, others untrimmed. Text and wrappers inexplicably foxed throughout (see images) and priced accordingly; apart from extremely minor abrasions at head and tail, the binding is superb state. PRINTED FOR THE ARTIST HIMSELF, Maurice Leloir, as stated in letterpress on the verso of the half-title, on Japon paper, with an extra suite of all the illustrations hors-texte bound in. Charles Nodier (1783-1844), author, insatiable book collector, and long-serving librarian of the BibliothÃ¨que de l'Arsenal, was the progenitor of the kind of bibliophily practiced in France to the present day. He was also an unrivalled seller of books by auction. In 1838 he declared that God had made him rich enough five times to buy books, and five times so poor that he had to sell them again. He sold his books for the first time in 1802 at the age of nineteen, and sold reconstituted collections, or parts of them, at auction in 1809, 1813, 1817, 1827, and 1829. In advance of forthcoming sales, Nodier aroused a great deal of excitement by publishing his own literary and bibliographical investigations into the books to be offered, in the form of "MÃ©langes" and "Nouveau MÃ©langes." It is a remarkable fact that Nodier wrote nearly all the descriptions that appeared in the posthumous sale catalogue of his library (Techener, 1844). Nodier was in the forefront of those French collectors who had simple contemporary bindings on old books ripped off and replaced by modern, more elaborate bindings; among his favored butchers were Koehler and Thouvenin. Our copy does not contain any statement of limitation which was bound in ordinary copies; instead, on the verso of the half-title the name of the special recipient is printed: "Exemplaire tire pour Monsieur Maurice Leloir." We have seen mention that the edition was limited to 150 numbered copies on Japon, from a total edition of 500. The number of "named" hors-serie copies has not be determined but it must have been extremely small. The binder, H.E. Laskine, clearly possessed a high degree of artistry and technical abilities; and yet very few bindings by him/her have been located: only three examples are listed in RBH's Rare Book Transactions database, which currently holds more than 10 million records (sic). Laskine remained unknown to Flety. (Inventory #: 3355)
$600.00 add to cart or Buy Direct from
Michael Laird Rare Books
Share this item

Chicago : DeBower-Elliott , 1904
(click for more details about Irish Literature (COMPLETE SET OF 10 VOLUMES))
View all from this seller>