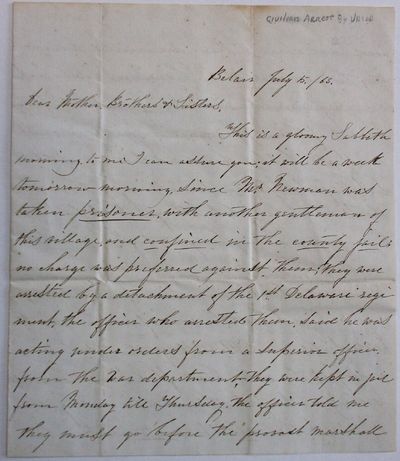 Maryland -- like her sister Border States of Delaware, Missouri, and Kentucky-- was a Slave State whose government remained loyal to the Union during the War. But each of those States contained many Confederate sympathizers. President Lincoln's policy was to suspend Habeas Corpus and subject such persons to military arrest and imprisonment, generally without charging them or granting them access to the normal incidents of due process. One such unfortunate, Robert W. Newman, is the subject of this letter from an associate known only as "Mary." Newman was Principal of Maryland's Harford Academy. "His arrest took place at Belair, near Baltimore, in the latter part of June, 1863, and was made by Lieutenant Offley, at the head of a detachment of Delaware cavalry, stationed in Baltimore, and commanded by the notorious Colonel Fish, then acting as Provost Marshal of the City." [Marshall, AMERICAN BASTILLE. A HISTORY OF THE ILLEGAL ARRESTS AND IMPRISONMENT OF AMERICAN CITIZENS DURING THE LATE CIVIL 621-623. Philadelphia: 1870.] After about a month's imprisonment he was released without charges. We have been unable definitively to identify Mary. From context, she was a close associate-- a relative, close friend, possibly even his wife. Her Letter reads, in full [capitalizations are underlined in the original]:

"Belair July 15 /63. | Dear Mother, Brothers & Sisters,
"This is a gloomy Sabbath morning to me I can assure you; it will be a week tomorrow morning since Mr. Newman was taken PRISONER, with another gentleman of this village, and CONFINED in the COUNTY JAIL; no charge was preferred against them; they were arrested by a detachment of the 1st Delaware regiment. The officer who arrested them said he was acting under orders from a superior officer from the war department. They were kept in jail from Monday till Thursday. The officer told me they must go before the provost marshall and have a hearing. Then we would know why they were arrested. I have anxiously looked every day since they were taken from here, for an account of their appearance before the provost marshall, but have heard no tidings of them. I shall probably know something of their whereabouts before long, but I thought it not best to delay writing you any longer, as you must be anxious to hear from me surrounded as I am with such commotion. For the last four days we have heard the roar of cannon, on the battle field. Our little village is desolate. Many of the men have fled since the arrests fearing a like fate. This whole country is in a state of the WILDEST EXCITEMENT.
"There is no Service in any of the churches in Belair today. The FUNERAL PALL has settled upon our very homes. Who can describe the SADNESS that broods over our land TODAY.
"I have about two thousand dollars worth of property here to take care of, so I cannot leave NOW, under any circumstances. Mr. Newman's friends will never let me suffer. Mr. Newman MAY BE released in a short time, but I think it MORE PROBABLE he will be sent South, or to a distant fort. If Mr. Newman is taken from us by death, or imprisonment, for a long period, or is sent South, and goes into the army you all know I shall never settle myself here. I shall endeavor to wait patiently for the future to be revealed, and at the same time thank my Heavenly father that he has given me strength of body and mind to endure my trials. I have felt stronger since Mr. Newman's imprisonment than I have before for several months. It is of course nervous excitement. I am taking medicine, under the doctor's instruction. I take a glass of wine every day at dinner.
"I read Phebe's letter-- glad you are all getting along so well. Write as soon as you get this, that I may hear from you Saturday. You dont know how DESOLATE I am- dont fail to write.
"Yours in affliction-- Mary (Inventory #: 37344)
$750.00 add to cart or Buy Direct from
David M. Lesser, Fine Antiquarian
Share this item
David M. Lesser, Fine Antiquarian Books LLC
Offered by

Boston : Printed and Sold by Mills and Hicks , 1774
(click for more details about SUNDRY VOTES PASSED BY THE CHURCH OF CHRIST IN DORCHESTER, ANN. DOM. 1773. PREVIOUS TO THE MEETING OF AN ECCLESIASTICAL COUNCIL THERE, THE RESULT OF SAID COUNCIL, &C. PUBLISHED BY ORDER OF SAID CHURCH)

PUBLIUS ON BANKING: OR, THE MONEY-CHANGERS' TABLES OVERTHROWN

by [Williams, Samuel B.]

New York : Printed for the Author , 1849
(click for more details about PUBLIUS ON BANKING: OR, THE MONEY-CHANGERS' TABLES OVERTHROWN)
View all from this seller>