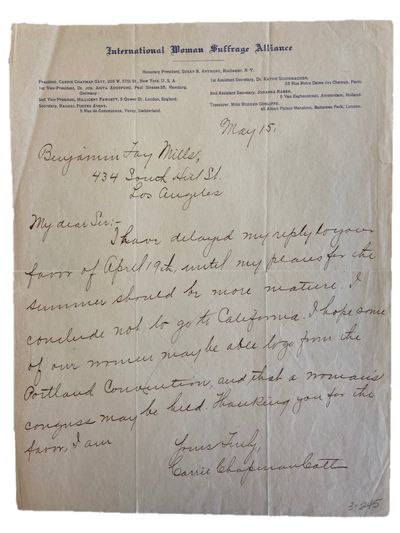 signed
by Catt, Carrie Chapman
Carrie Chapman Catt. Leader in women's rights, protégé of Susan B. Anthony, and founder of the International Women's Suffrage Alliance (IWSA), which continues today to advocate on behalf of women's and girls' rights worldwide. 1 page Autograph Letter Signed on International Woman Suffrage Alliance letterhead circa 1906. Catt founded the IWSA 1904, and by 1906 she was organizing its first international summit in Berlin. That same year, she was also giving lectures across the U.S., including at the Portland meeting of the National American Woman Suffrage Association (NAWSA), in which she had succeeded Susan B. Anthony as president. Catt, a dynamic speaker and organizer, balanced her engagement with the domestic NAWSA with her own international organization IWSA because she believed fully in the importance of pursuing women's equality across all states and nations. In her Autograph Letter Signed from 1906, she reveals the intensity of her involvement, as she writes about being unable "to go to California" because of her commitments both to the Portland NAWSA Convention and to the IWSA Berlin summit. Yet Catt remains involved in planning a congress for California, writing that she is gathering "some of our women [who] may be able to go from the Portland Convention, [so] that a woman's congress may be held." She signs in her hand "Carrie Chapman Catt. (Inventory #: 15201)
$3,800.00 add to cart Available from
Share this item
Max Rambod Inc.
Offered by

by US Navy, Pilot Manual