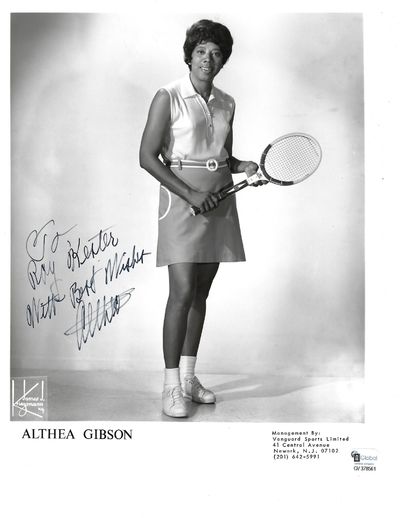 signed
by [Tennis], Althea Gibson
[African-American] Althea GIbson. Tennis legend, and first black athlete to cross the color line of international tennis. c. 1970. Photo signed. 10 x 8 in. Signed in black marker "To Ray Kenter with Best Wishes, Althea". Gibson became the first African-American to compete at the U.S. National Championships. Gibson had a jam-packed eight-year career, with all of her major championships coming from 1956 to 1958, when she appeared in a stunning 19 major finals and won 11 titles, including single and doubles championships at the Australian Open, French Open, Wimbledon, and the U.S. Nationals. Gibson was the first non-white woman to win a major tennis championship, and only one other woman of color had claimed this honor until Serena Williams won the US Open in 1999. At the height of her career, she was ranked No. 1 tennis player in the world; after she retired from tennis, Gibson became the first African-American to compete on the women's professional golf tour in 1960. (Inventory #: 16663)
$450.00 add to cart or Buy Direct from
Share this item
Max Rambod Inc.
Offered by