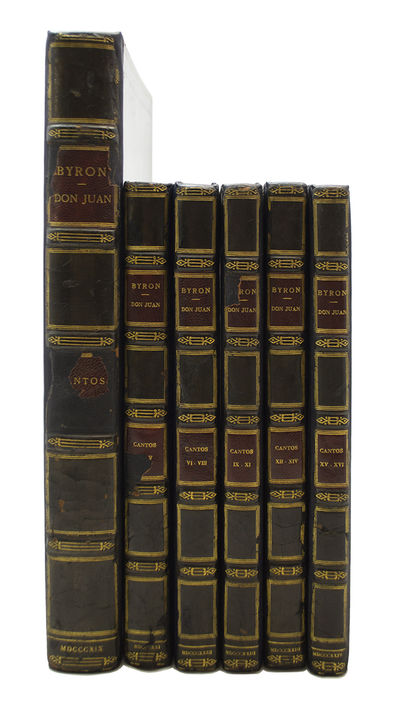 by BYRON, George Gordon, Lord
First Edition of Byron's Finest Long Poem, Handsomely Bound by Zaehnsdorf BYRON, George Gordon, Lord. Don Juan. London: Printed by Thomas Davison, 1819-1821; Printed for John Hunt, 1823; Printed for John and H.L. Hunt, 1824. First editions, complete in six volumes (Cantos I and II in one large-paper quarto volume: 10 3/4 x 8 inches; 272 x 204 mm; Cantos III-XVI in five octavo volumes: 8 1/8 x 5 1/8 inches; 207 x 129 mm). [4], 227, [1, printerís imprint]; [4], 218, [1, blank], [1, printer's imprint]; vii, [1, blank], [1], [1, blank], 184, [2, ads ("Publications by John Hunt," dated July, 1823)]; 151, [1, printerís imprint]; 168; 129, [1, publisher's imprint], [2, ads ("Published by John and H. L. Hunt," dated March, 1824)] pp. With the half-titles in volumes I and II (no half-titles called for in the last four volumes) and errata slip in volume VI. Bound without publisher's ads in volume IV and one of two ads in volume VI. Uniformly bound by Zaehnsdorf in full navy polished calf. All volumes rebacked, preserving original spines and labels. Boards triple ruled in gilt. Spines stamped and ruled in gilt. Each spine with two red morocco labels. Gilt dentelles. Board edges gilt. All edges gilt. Silk placeholders. Marbled endpapers. Some chipping to labels of volume I, II, IV. boards with some light rubbing. Some cccasional light foxing, as usual. Otherwise, an excellent and attractive set. Don Juan, Byronís unfinished epic satire in ottava rima, was published in sixteen cantos between 1819 and 1824. ìDon Juan, a young gentleman of Seville, is sent abroad by his mother at the age of 16, in disgrace after an intrigue. His ship is wrecked and the passengers take to the long-boat. After many tribulations, in the course of which first Juanís spaniel and then his tutor are eaten by the crew, Juan is cast up on a Greek island. He is restored to life by HaidÈe, the daughter of a Greek pirate, and the pair fall in love. The father, who is supposed dead, returns, finds the lovers together, and captures the fighting Juan, who is put in chains on one of the pirateís ships. He is then sold as a slave in Constantinople to a sultana who has fallen in love with him. He arouses her jealousy and is threathened with death, but escapes to the Russian army, which is besieging Ismail. Because of his gallant conduct he is sent with dispatches to St Petersburg, where he attracts the favour of the Empress Catherine, who sends him on a political mission to England. The last cantos (the ëEnglish cantosí) of the unfinished work are taken up with a satirical description of social conditions in England and with the love affairs of Juan...Don Juan himself is a charming, handsome young man, who delights in succumbing to the beautiful women he meets, but his character is little more than the connecting thread in a long social comedy, a poetical novel, of satirical fervour and wit. The first two cantos were ill-received by the critics, who called them ëan insult and an outrageí and ëa filthy and impious poemí, but the work became increasingly successful with the general public and was much admired by Goethe, who translated a part of itî (The Oxford Companion to English Literature). Ashley Library I, pp. 157-159. Tinker 571. Wise, Byron, II, pp. 3-8. HBS 68418. $8,000 (Inventory #: 68418)
$8,000.00 add to cart Available from
Heritage Book Shop
Share this item