Must They Die? + A Fact Sheet on Anti-Semitism in the Case: Newspaper Comment[s] + 3 related ephemera 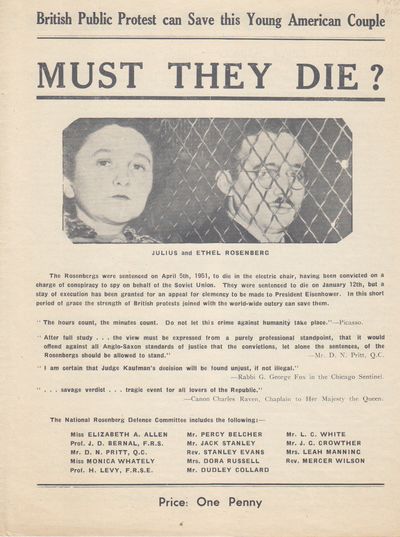 by Rosenberg, Ethel and Julius (Subjects)
New York: National Committee to Secure Justice in the Rosenberg Case. First Edition; First Printing. Handbills. 1)Must They Die? is 4pp, very good+ to near fine, printed on newsprint. Front page his photo of Rosenbergs behind a chain-link fence, with first line "British Protest Can Save This American couple." + 2) A single leaf, 9 x 14", printed on both sides, excerpting remarks and paragraphs of significant commentators on the subject of whether or not the Rosenberg case was affected by anti-Semitism. Among those are Rabbi G. George Fox in the Sentinel, a Jewish weekly published in Chicago, Jewish Daily Forward, Jewish Day, Samuel Gach (publisher of California Jewish Voice,) Yiddish poet H. Leivik, and more. Near fine, [mis]folded once. Together with 3) 8 x 10' UK Press Release from the National Rosenberg Defence Committee, London, February 12, 1953, fine; with 4) two 8½ X 11" press releases picturing press clippings about the case, from the National Committee to Secure Justice in the Rosenberg Case. ; 8vo 8" - 9" tall; 4, 1 pages . (Inventory #: 31480)
$25.00 add to cart Available from Beasley Books
Share this item