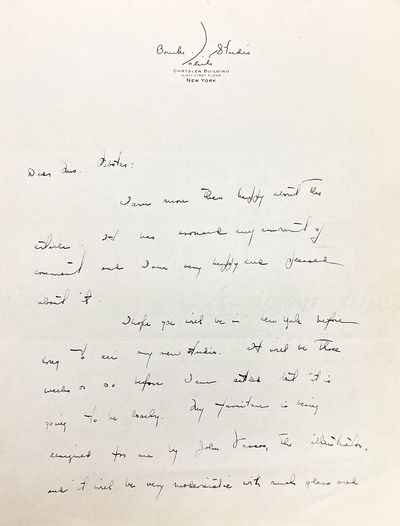 by BOURKE-WHITE, MARGARET
New York: np, 1930. First edition. nb. Very Good. MARGARET BOURKE-WHITE SHARES HER EXCITEMENT AT MOVING INTO HER NEW OFFICE AT THE CHRYSLER BUILDING, A BUILDING THAT HELPED SHAPE AND DEFINE HER CAREER. Background - Margaret Bourke-White and the Chrysler Building:

"Bourke-White, when she was in Cleveland, became a well-known industrial photographer. The Chrysler Corporation got to know her, and they hired her to photograph the final construction of the building from 1929 to 1930. She was on scaffolding and on towers about 800 feet off the ground. It got windy, and the scaffolding swayed from side to side. The assignment gave her the idea that she wanted to live in the Chrysler Building: she wanted the best address. At the same time Henry Luce had hired her to be the photographer for Fortune magazine.

The only person who can live in the building is the janitor. She had such chutzpah, she applied for the job as janitor. She finds that the job has been filled by someone else, so she had to live someplace else and could only have her studio in the Chrysler Building. Bourke-White doesn't want just any apartment there. She wants the 61st floor, the terrace where two of the gargoyles are. She is a woman photographer, and there was a bias about that, that she'd get married, have a baby, quit a job. Fortune wouldn't rent her the space on her own, even though she was making tens of thousands of dollars. Her lease had to be cosigned by Time Inc. Isn't that amazing? She paid $387.92 per month, plus electricity -- that was a lot of money back then -- and hires her good friend, John Vassos, an industrial designer, to create an Art Moderne stylish interior, with extensive built-ins, subdued palette, woods and metals.

There was a main sitting area, an alcove for her desk, stairs that go out to the terrace. The superintendent reminded Bourke-White that her lease did not include access to the terrace, and she wrote back, "Of course." But she invited businessmen whom she wanted to befriend to have cocktails on the terrace."

(Stephen Bennett Phillps, curator at the Phillips Collection and organizer the traveling exhibition "Margaret Bourke-White: The Photography of Design, 1927-1936", The New York Times, 2003).

Bourke-White grew so fond of the gargoyles that she named them Min and Bill; the two art deco beasts kept company with Bourke-White's live beasts - the photographer's two pet alligators who resided outside on one of the studio's balconies. Its design inspired by the 1929 Chrysler Plymouth Hood ornament, the gargoyles were among the many automotive-inspired architectural features to adorn the building. Bourke-White's interest in these gargoyles recalls the sleek industrial aesthetic typified in her 1920s photography, and foregrounds Bourke-White's work in the USSR photographing industrial - and particularly car - factories.

Her stint at Fortune was what took her first to assignments outside of the United States, as referenced in this letter; namely, a job photographing the Krupp Iron Works in Germany. From there, Bourke-White went on to photograph the effects of the Five Year Plan in the Soviet Union, a government project to bolster industrialization in the area, and made several trips back to the USSR in the years to follow.

In this letter, penned in late 1930, Margaret Bourke-White writes about her "new studio" in the Chrysler building. The recipient is Edna Robb Webster, an early explorer of Mayan ruins on the Yucatán Peninsula and a writer who enjoyed a robust correspondence with Bourke-White during this era and into the 1950s. The photographer wrote often to Webster about her work, even sending along signed images at times.

I am more than happy about the article. It has around any amount of comment and I am very happy and pleased about it.

I hope you will be in New York before long to see my new studio. It will be three weeks or so before I am settled but it is going to be lovely. My furniture is being designed for me by John Vassos, the illustrator, and it will be very modernistic with much glass and natural wool and aluminum -- all of which is to happen on a background of rose-colored rugs. I have two terraces out of my studio windows. One gets the morning and one the afternoon sunlight, and I plan to dictate on the east balcony in the morning and serve tea on the southern balcony in the afternoon. My most prized possession are the two huge stainless steel gargoyles which shoot off of my balconies. They are very startling and wonderful against the view. It was for the balconies and gargoyles that I chose the sixty first floor.

I hope you will be in New York to see it all. And I would enjoy showing you some of the new pictures of Germany and Russia. I would like also to hear more of your adventures sometime, which I am sure are worth talking about.

A letter important not only because of the wonderful details it offers about the early projects of Bourke-White's long and wide-reaching career, but also because of the way it reads as a tender tribute to the Chrysler Building, to its gargoyles, and to the New York skyscape. (Inventory #: 2421)
$3,900.00 add to cart or Buy Direct from
Manhattan Rare Book Company
Share this item