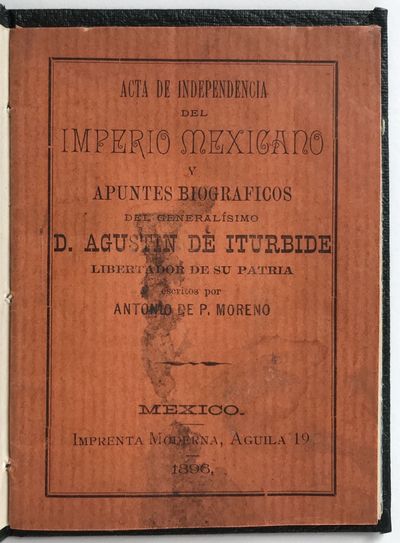 by Moreno, Antonio de P.
Mexico City: Imprenta Moderna, 1896. Good plus.. 24pp. 16mo. Original printed wrappers bound into modern cloth, front board gilt letters. Light soiling to wraps; small chip at fore-edge of rear wrapper. Light, even tanning. Small, scarce pamphlet that prints the 1821 Mexican Declaration of Independence by Augstin de Iturbide and a brief biography of the first leader of independent Mexico. The work, published in 1896, likely saw use as a portable, patriotic history lesson for school children or as a civics refresher for those engaged in the federal elections of that year, in which Porfirio Diaz won his fourth presidential term. The author, Antonio Moreno, is decidedly pro-Iturbide, and spends the last few pages here attempting to refute contemporary critics and historic opponents of the "Author of Mexican Independence," who was executed by firing squad in 1824. We locate four copies, at Berkeley, UCLA, NYPL, and Indiana. (Inventory #: 1672)
$350.00 add to cart Available from
McBride Rare Books
Share this item