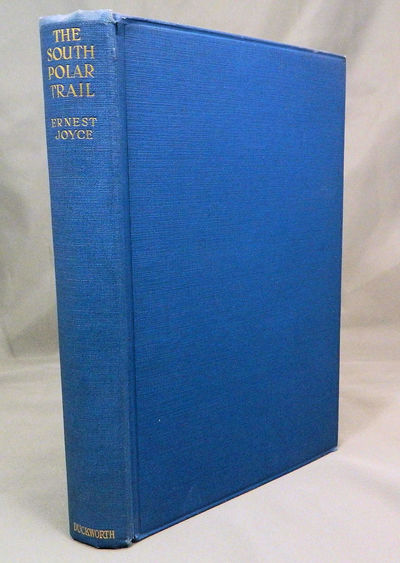 by Joyce, Ernest
London: G. Duckworth, 1929. First Edition. Near Fine. 8vo [8.5x6in]; 220 pp., frontispiece image of Joyce and Oscar, introduction by Hugh Robert Mill, 31 plates of 60 black and white images, map of route p. 30; Light blue cloth covers with gilt lettering on spine, without errata slip after map; Minor shelf wear with slight rubbing to edges, joints, covers, top edge slightly dusty, small spot on fore edge. [Rosovo 188.A.1b, Howgego III, S22, Spence 642, Conrad p. 220]. Ernest Edward Mills Joyce (1875-1940), a Royal navy seaman and Antarctic explorer that participated in four major expeditions. The British National Antarctic Expedition (Discovery) Expedition 1901-04 under Robert Falcon Scott, the British Antarctic Expedition (Nimrod) 1907-09 under Ernest Shackleton, the Australasian Antarctic Expedition (Aurora, John King Davis) in 1911-14 under Douglas Mawson and the Imperial Trans-Antarctic Expedition (Endurance, Frank Arthur Worsley, and Aurora, Davis) in 1914-17 under Sir Ernest Shackleton (Weddell Sea Party) and Aeneas Lionel Acton Mackintosh (Ross Sea Shore Party). This book is "... the principal firsthand account of the Ross Sea shore party..." (Rosove). Only a brief summary was included in Shackleton's book, South. The Imperial Trans-Antarctic Expedition objective was to cross the Antarctic continent from the Weddell to the Ross Sea through the South Pole. This required laying supply depots from Hut Point to the Beardmore glacier to support Shackleton's party in their northward march from the South Pole to the Ross Sea. With the lost of the Endurance, Shackleton abandoned the Polar trek to save all 28 men marooned on the sea ice. A great story of courage and endurance for survival. The Ross Sea shore party also had problems with the ice conditions in McMurdo Sound preventing the supply stores from being transferred from the ship to Hut Point. The Aurora was also beset in the ice and broke away from the winter quarters landing during a blizzard with most of the stores, equipment and clothing. The remaining 11 men had inadequate clothing and supplies, but were successful in laying the six depots over 750 miles during the summer months. However, conditions were grim at Hut point with little food. The hut at Cape Evans, with adequate supplies was 13 miles away over the sea ice. From Rosove, "Joyce was forthright, courageous, and tenacious ... assuming moral leadership when Aeneas Mackintosh was disabled and again after his death." He led the remaining men to Cape Evans to be rescued by the Aurora in 1917. Copies with and without the errata slip are common. The slip corrects an error on the map and reads "In the chart [of the depots] on page 30, for £3,000 worth read 3,000lbs. (Inventory #: 11282)
$719.00 add to cart Available from
David Spilman Fine Books
Share this item