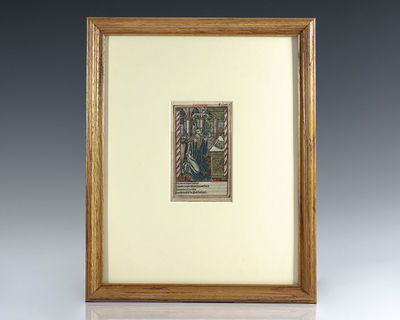 first edition
Rare illuminated leaf from a German Medieval Book of Hours. One page, text in Latin, hand-colored and elaborately illuminated, the image depicts a scene from the book of Samuel in which David offers a sacrifice to God in an attempt to end plague on Israel. In fine condition. Matted and framed. The entire piece measures 15.5 by 12.5 inches. A collection of prayers to be recited at canonical hours, the book of hours became popular in the Middle Ages, with illumination and decoration restricted to decorated capital letters at the start of prayers and psalms in most examples. Books created for wealthier patrons, however, were often decorated with lavish full-page miniature scenes depicting the eight Hours of the Virgin and the Labours of the Months and signs of the zodiac. The earliest example of full-page calendar miniatures in a book of hours were found in the Tres Riches Heures of the Duke de Berry, the most famous and possibly the best surviving example of French Gothic manuscript illumination. The Dresden Prayerbook (actually a Book of Hours, now destroyed) had such a series, and its illuminator was especially favored for his calendar scenes, often contributing them to manuscripts painted by other artists. (Inventory #: 120863)
$975.00 add to cart or Buy Direct from
Raptis Rare Books
Share this item