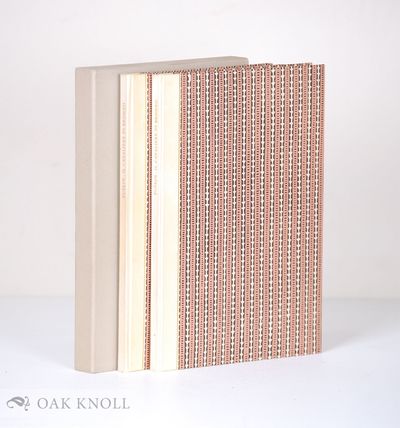 by Puskin, Aleksandr
Verona, Italy: Officina Bodoni, 1968. quarter vellum, decorated paper covered boards, title and author in gilt on spine, top edge gilt, slipcase. Officina Bodoni. small 4to. quarter vellum, decorated paper covered boards, title and author in gilt on spine, top edge gilt, slipcase. (iv), 66, (7); (iv), 53, (8) pages. The first 1967 edition is limited to ten copies. After Giovanni Mardersteig's collaboration with Wadim Lazursky, they state: "The original Russian poem after the "Belles Lettres" edition, Moscow-Leningrad, 1964, with an Italian verse translation by Nerina Martini Bernardi; and wth a heliogravure title-page vignette of Peter the Great's equestrian statue." The Officina Bodoni 1923-1977.p. 137. The printer, Giovanni Mardersteig, states "At the bicentenary celebrations of the Leipzig Graphic Academy in 1964 I made the acquaintance of some of the best-known Russian book designers and graphic artists, among them Vadim Lazursky. We met several times and soon were deep in discussion about the origins and history of our respective printing-types. Our views turned out to be remarkably alike, and we discovered that my astonishingly well-informed and well-read Russian colleague had used the same point of departure when drawing his cyrillic alphabets as I had done for my new typefaces, manely the Roman capitals and the forms brought back to life in the Renaissance. Our early occasional contact grew into a regular exchange of ideas. During our long correspondence, and stimulated by what I had seen of his work, I suggested that our type designs - his cyrillic letters and my existing Dante type - should be made to harmonize so that we could use them on facing pages for a bilingual edition of the same text.

I Had Pushkin's magnificent poem The Bronze Horseman in mind, without realizing that Pushkin was Lazursky's favourite author. So he was delighted with the idea and sent me the Russian text and his cyrillic alphabet. I had this cut in 14 point by Ruggero Olivieri in Milan for use with the same size of Dante. Meanwhile I had asked the Contessa Nerina Martini Bernardi, who had very successfully translated Krylov's fables into Italian, to do the same with Pushkin's poem. In the opinion of experts her version was brilliantly successful. The first casting of the Russian type, though good in itself, resulted in too heavy an overall impression when seen on a whole page, so much so that it almost looked like a semi-bold. As a record of this first attempt, a few copies of Pushkin's poem were printed, not however with the Russian text facing the Italian, but with the one following the other.

With Vadim's consent the cyrillic drawings were slightly retouched and then cut afresh." [Mardersteig, 151]. Absolute fine condition of this incredibly scarce Bodoni imprint.

-with the accompanying volume-

One of 165 numbered copies printed in January of 1968. "An account of the first version of Vadim Lazursky's cyrillic type, cut for the Officina Bodoni, was given under No. 151. The second version produced the desired result and required no further corrections. Placed side by side, the texts in cyrillic type and Dante were happily balanced, and this despite the differences between the two alphabets, most cyrillic characters being derived from Majuscules, and only the letters a c e o x p y corresponding in shape with roman minuscules.

The moment had now come to ask Lazursky to come from Moscow to check the proofs and supervise the printing with me. The month of his visit to Verona and our collaboration are among the most splendid experiences of my career as a printer. At one point our mutual friend Hermann Zapf, the outstanding type and book designer, visited us from Frankfurt. We spent a most stimulating evening together and emptied several bottles of the unique red wine of Falerno, which Vadim had very much wanted to try. However, I could not give him any assurance that the Falerno drunk and praised by Virgil and Horace when the met at Mondragone was similar to that of today.

The Contessa Nerina, who had translated the poem written by Alexander Sergeevic Pushkin, also visited us. An amazing coincidence was discovered during our conversation. A Russian ancestor of hers had been the St Petersburg doctor who gave Pushkin first aid when, in a duel, he had suffered the serious injuries from which two days later, on 29 January 1837, he died" [Mardersteig, 153]. A fine copy.

Prospectus inserted into both volumes, with the announcement ephemera loosely inserted into the 1967 volume. Both volumes housed in the publisher's slipcase. Predictably, OCLC locates 10 copies worldwide of the 1968 edition with the revised typeface, however OCLC locates zero copies of the trial run 1967 imprint. Provenance: from the Gonnelli Casa D'Aste sale ASTA 29: Grafica E Libri, December 1-3, 2020, lot #923. (Inventory #: 135403)
$12,438.00 add to cart or Buy Direct from Oak Knoll Books
Share this item

ENCHIRIDION OF EPICTETUS: A MANUAL FOR LIVING.|THE

Austin, TX : Press Intermezzo , 1997
(click for more details about ENCHIRIDION OF EPICTETUS: A MANUAL FOR LIVING.|THE)

HOLY BIBLE: CONTAINING THE OLD AND NEW TESTAMENTS, AND THE BOOKS CALLED APOCRYPHA

Oxford, United Kingdom : Printed at the University Press , 1958
(click for more details about HOLY BIBLE: CONTAINING THE OLD AND NEW TESTAMENTS, AND THE BOOKS CALLED APOCRYPHA)
View all from this seller>