The Exiles of Florida: Or, the Crimes Committed By Our Government Against the Maroons, Who Fled from South Carolina and Other Slave States, Seeking Protection Under Spanish Laws 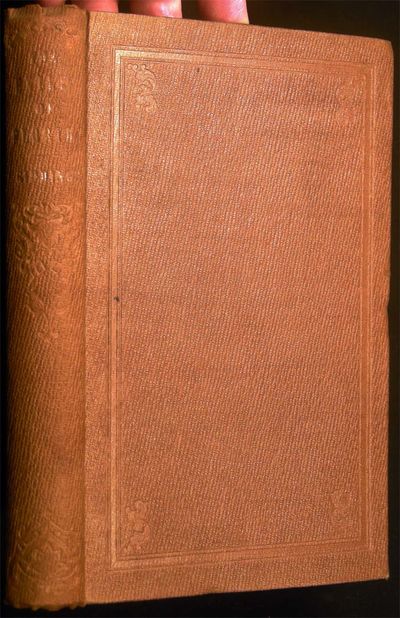 by Giddings, Joshua R.
Columbus, Ohio: Follett, Foster and Company, 1858. viii + 338 pages; frontispiece illustration woodcut of the Death of Waxe-hadjo and others in the text, portraits of different Native American subjects. Joshua Reed Giddings (1795 - 1864) American antislavery congressman from Ohio, "...was imbued with inflexible moral and political principles that kept him on an antislavery, antisouthern course throughout his long career. Believing slavery to be exclusively a state matter, he opposed any federal measure that could be construed as supporting it. Thus he called for the end of slavery and the slave trade in the District of Columbia and argued against the Seminole War, which he believed the government waged at the South's behest in order to protect slavery..." (Merton L. Dillon in the ANB) Previous owner name of G.A. Barstow and the small, faint previous owner stamp of collector George R. Brush M.D., U.S. Navy; in service as a surgeon & medical inspector, from 1861-1894. Approx. 5 1/2" x 8" size, bound in the original decoratively blind-stamped & textured cloth; gilt spine titles rubbed away. Some edge, tips wear to the binding; some spotting and foxing to title, illustrations & text leaves; sturdily bound and in good condition. . First Edition. Hard Cover. Good. (Inventory #: 27029)
$125.00 add to cart or Buy Direct from Certain Books
Share this item
Certain Books
Offered by

The New York Journal of Medicine and the Collateral Sciences. Edited By Samuel Forry, M.D.

Manual of the Common Council of the City of Brooklyn for 1871, Compiled By William G. Bishop, City Clerk, Brooklyn, 1871