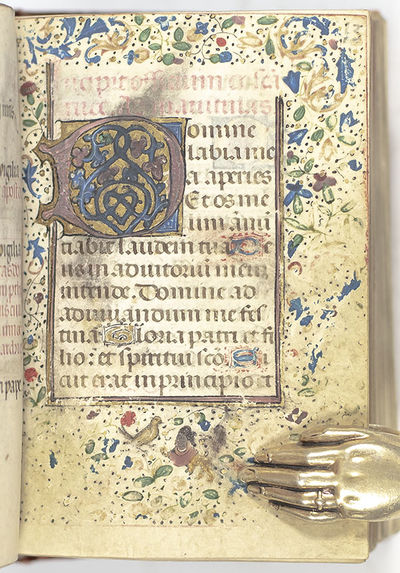 first edition
Exceptionally rare Franco-Flemish miniature illuminated Book of Hours. 16mo, bound in full 18th century red velvet, script on vellum, illuminated with thirteen elaborately historiated initials and four brilliant illuminated initials within lateral floral borders and numerous other small initials. In near fine condition. Housed in a custom box. A beautiful example. A collection of prayers to be recited at canonical hours, the book of hours became popular in the Middle Ages, with illumination and decoration restricted to decorated capital letters at the start of prayers and psalms in most examples. Books created for wealthier patrons, however, were often decorated with lavish full-page miniature scenes depicting the eight Hours of the Virgin and the Labours of the Months and signs of the zodiac. In the 14th century the book of hours overtook the psalter as the most common vehicle for lavish illumination. This partly reflected the increasing dominance of illumination both commissioned and executed by laymen rather than monastic clergy. It was at this time that a number of bibliophilic royal figures began to collect luxury illuminated manuscripts for their decorations, a fashion that spread across Europe from the Valois courts of France and the Burgundy, as well as Prague under Charles IV, Holy Roman Emperor and later Wenceslaus. (Inventory #: 190504)
$30,000.00 add to cart or Buy Direct from
Raptis Rare Books
Share this item