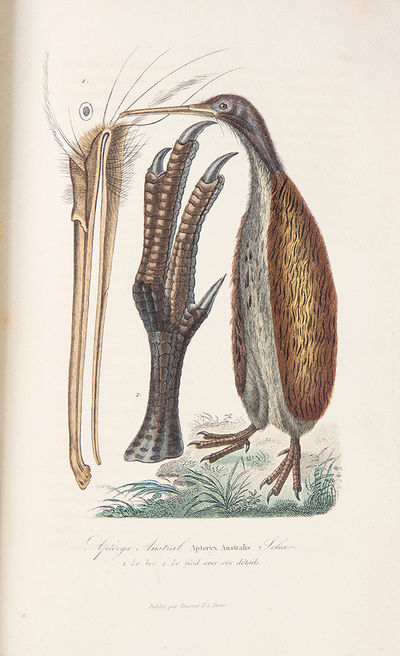 by LESSON, René Primevère (1794-1849)
Paris: P. Pourrat Freres, 1838. 8vo, 2 volumes. (9 1/8 x 5 7/8 inches). Half-titles. Frontispiece portrait in volume 1. 510, [1]; 547, [2]pp. Including errata leaves. Title vignettes in both. 41 plates (19 color, 2 folding). Light foxing. Quarter calf over marbled boards, spine flat, black lettering pieces, marbled edges, marbled endpapers. First edition of this detailed account by the naturalist aboard Duperrey's voyage, with beautifully colored natural history plates. "The 'Coquille,' under the command of Captain Duperrey, visited Sydney in 1824, remaining there from 17th January to 20th March. King Bungaree, a very quaint figure, who spoke a little English, waited upon the Frenchman, with his retainers. The aborigines are fully described, and the excursions of observations of the visitors recorded" (Ferguson). "This voyage of 1822-25, commanded by Duperrey, largely scientific in purpose, called at Brazil and the Falkland Islands, and then rounded Cape Horn and sailed up the coast visiting Conception, Callao, and Payta. Heading towards the Tuamotu Archipelago, Duperrey discovered Clermont Tonnere (Reao) and then went on to Tahiti. In June 1823, the Coquille sailed for Port Jackson via Tonga, the Santa Cruz Islands, New Britain, New Ireland, and the Moluccas. 1824 saw Duperrey in the Bay of Islands at New Zealand. Next he sailed to Rotunda, the Gilberts, the Carolines, New Guinea, and Java before making his way home. The expedition achieved notable scientific results and corrections in maps, much meteorological data, and many rock samples and botanical specimens were brought back. Lesson was the naturalist of this expedition, and his account of the voyage supplies the details which Duperrey failed to publish" (Hill). In this work, Lesson provides detailed descriptions of the places and people he visited, including the Falklands, New Guinea, Tahiti, other south Pacific islands, New South Wales, and New Zealand. Most of the plates show natural history objects such as the kangaroo, parrots, birds of paradise, etc. Lesson was educated at the naval medical school at Rochefort. In 1822 he joined the company of the expeditionary ship "Coquille," serving as medical officer and naturalist with P. Garnot, under the natural historian J.-S.-C. Dumont d'Urville. The fieldwork that Lesson performed during the two-and-half-year circumnavigation was the foundation of both his fame as a natural historian, and also provided much of the information and experience that he used when writing this and his other companion monographs. When "Cuvier and Latreille reported to the Academy of Sciences on the ['Coquille'] expedition's zoological data and collections [...] Lesson and Garnot were praised for bringing back hitherto unknown species of birds, reptiles, fish, mollusks, and crustaceans. Lesson was also cited for his remarkable colored illustrations of fish and mollusks and for his valuable aid to Dumont d'Urville for the insect collection" (DSB VIII, p. 265). Hill 1012; Ferguson 2787; Borba de Moraes I, p. 475; Sabin 40214; Chadenat II 7072; Hocken, p. 73. (Inventory #: 39667)
$1,800.00 add to cart or Buy Direct from
Donald A. Heald Rare Books
Share this item
Donald A. Heald Rare Books
Offered by