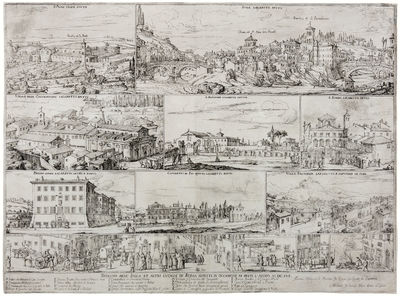 
Very rare (no US copy) fascinating illustrated broadside sold in Rome during the pandemic of 1656-57, presenting through a series of "snapshots" of the city at this dramatic moment in time a rich and varied iconography of its response to the plague. Printed by Giacomo Molinari and sold in the Strada Nuova behind the church of the Giesu close to Piazza Navona, the print is composed of 15 vignettes of different sizes and perspectives along with 20 short explanatory captions alphabetized from A to X at the base of the print keyed to guide the reader to a fuller grasp of the situation. Taken together, these scenes were meant to capture the city through the measures taken to contain the spread of the disease, cure the afflicted and dispose of the dead.
Eight are views of civic, religious and private resources- some bird's eye encompassing a panorama, others close up of specific recognizable buildings- depicting basilicas, churches, a convent, a prison and private residences to give the viewer the scope of the city's repurposed infrastructure. Medieval and modern structures were converted into lazarettos used as temporary quarantine and purgation centers for the afflicted according to the seriousness of their contamination. Two of the views depict the lazaretto brutto (leper colony) dedicated to the worst cases: the Isola Tiberina and the Convent and Hospital of Santa Maria della Consolazione, run by the brothers Hospitallers of Saint John. The Isola Tiberina, one of the poorest areas of Rome and close to the Trastevere district with its Jewish ghetto has gates and fences at its perimeter capturing the isolation of the seriously contaminated within its bounds. A depiction of a special boat to ferry the dead Jews and the domestic animals, which were tossed live in the Tiber, add dramatic macabre details. Three other views are of the lazaretto netto (the churches of San Pancras, San Eusebio, and the private residence of Pius V) dedicated to patients with milder cases. In addition, there is a representation of a lazzaretto netto e pulito, located at the new jail recently built by Pope Innocent X which was used as a stufa (something between a Roman bath and a modern sauna) where those who were in quarantine in San Pancrazio and San Eusebio were washed and sterilized. The Villa Sandesio is dedicated to the burning of the contaminated clothing. The Basilica of San Paolo le Mure, which in fact was the last stop for the afflicted, where the deceased received their last sacraments and buried in the mass graves close by, is prominently illustrated in the upper left corner.
Beneath the views, 7 smaller vignettes vividly render social scenes during the pandemic: the images include ecclesiastical dignitaries, confessors, doctors, surgeons, all actively moving around the city to alleviate the physical and psychological burden of the sick. Guards, omnipresent in the images, were responsible for transporting the infected by carriage or by foot to their assigned destinations as well as disposing of the dead and of the contaminated clothing and furniture -- often tossing them in a bonfire in the street as shown by the image in the lower right of the print. Such images recorded and served to emphasize the severe laws of "social distancing" between the sick and the healthy then in place. Additionally, along the bottom of the print, are 20 short explanatory captions alphabetized from A to X, and keyed to the views and vignettes, to guide the reader to a better understanding of the situation.
"The management of the Rome plague of 1656-57 was a great success. Its mastermind was the cleric Girolamo Gastaldi, who at the start of the outbreak was serving both as the Commissario Generale dei Lazzaretti (the Chief Administrator of the epidemic hospitals) and the Commissario generale di Sanità per lo Stato della Chiesa… Only 4,500 died in Rome (about 8% of the population), compared to the 150,000 who died in Naples and 50,000 in Genoa, representing over half of their respective populations."—See Michael Widener's comments on Gastaldi's Tractatus… Bologna, 1684: https://library.law.yale.edu/news/epidemics-and-quarantines-17th-century-rome. "The well-thought-out measures devised by Cardinal Gastaldi for the control of the plague of 1656 in the Eternal City represent the most logical development of eradicative anti-contagionist practice before the twentieth century and could still serve as a model for action against any truly contagious disease" (Hirst, pp. 408-9) .
The print was engraved by Giovan Battista Gallestruzzi (1615-1669), a painter and engraver, member of the Accademia di San Luca in Rome. (For more on this artist see https://www.treccani.it/enciclopedia/giovanni-battista-galestruzzi_(Dizionario-Biografico)/) It is very rare: Both OCLC and ICCU list only one copy, at the Biblioteca Nazionale Centrale in Rome under Gallestruzzi. Rose Marie San Juan, in her book, Rome, a city out of print, p. 233-34 attributes the print (also illustrated in her book) to Johann Friedrich Greuter, active in Rome at that time. Nevertheless, the monogram of Gallestruzzi illustrated in his Benezit entry ( vol. IV, p. 588) is identical to the one on the print, and all indications lead us to believe that the designer of the print is Gallestruzzi.*L. F. Hirst, The conquest of the Plague, pp.408-09: Rose Marie San Juan, Rome, a city out of Print, p.233-34: Benezit, vol. IV: p.588: Laura Volpe for the DSB, vol. 51. (Inventory #: 6021)
$3,850.00 add to cart Available from Martayan Lan
Share this item
Martayan Lan, Inc.
Offered by