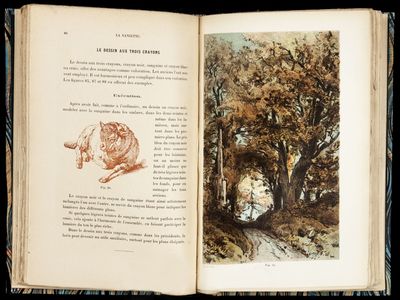 
Uncommon 1886 (2nd) edition of this copiously illustrated drawing manual from 19th-century Paris, first penned in 1873 on the eve of the rise of Impressionism and intended to help artists working outside of the academy to become familiar with the fundamentals of perspective, the wide variety of drawing materials and techniques available to them, and indeed how to make drawings away from the studio, en plein air, an outdoor method which would become fundamental to the ethos and aesthetics of French painting in the last quarter of the century. The manual was authored by the Barbizon school painter Armand Cassagne (1823-1907), whose volume here is of special note in that contains real samples of 21 types of white and colored drawing paper available to draftsmen at the time. This edition also takes advantage of new techniques in color printing to better illustrate the use of color drawing material and colored paper.

Although seemingly aimed at novice artists, Cassagne's drawing books nevertheless apparently found a wide audience in the democratizing world of late 19th-century art: Vincent van Gogh, for example, famously wrote in 1882 to his brother Theo about how a drawing manual by Cassagne had greatly helped him: "What made me stop doubting is that I read a clearly written book on perspective, Cassagne, Guide de l'Abc du dessin, and a week later drew an interior of a little kitchen, with stove, chair and table and window in their place and on their legs, whereas it used to seem to me downright witchcraft or coincidence that one had depth and proper perspective in a drawing. If you drew just one thing as it should be drawn, the desire to attack 1,000 other things would be irresistible. But the most difficult part is taking that first step" (2 April 1882).
In the present Guide pratique pour les différents genres de dessin, Cassagne orients readers to materials and tools of the trade, including items needed for drawing en plein air: Recommended (and illustrated) are a parasol, folding stool, a portable drawing board and sketchbook, pencil box, collapsible paint tubes, watercolor kit with a portable water canister, as well as conté crayon, charcoal, red chalk [sanguine], ink [brush, quill, fountain pen], sepia, pencils, erasers, brushes, etc.
This example of the Cassagne manual is in its second edition of 1886 (the first edition appeared in 1873), showing that Cassagne's methods retained their popularity throughout the first decade of Impressionism and to the eve of the rise its yet more radical offshoots.
OCLC locates U.S. copies of this 1886 edition of Cassagne at the Art Institute of Chicago, Cleveland Museum of Art, and University of Alabama-Birmingham. The 1773 first edition is held at the NYPL, Library of Congress, and Winterthur.
*Catalogue of the Printed Books in the Library of the British Museum, vol. 3, col. 57. (Inventory #: 5811)
$850.00 add to cart Available from Martayan Lan
Share this item
Martayan Lan, Inc.
Offered by