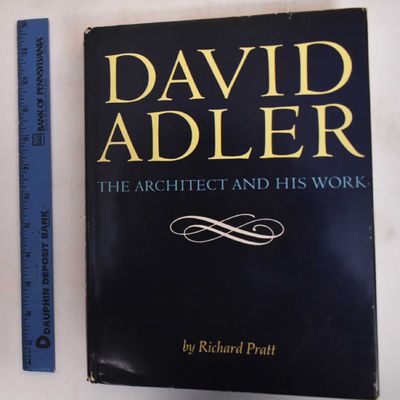 by Pratt, Richard
New York: M. Evans and Company, 1970. Hardcover. VG/VG- (pages are clean and tight. Title half page has a small tear and previous owner's name stamped. Dust jacket has overall light wear and tears, front flap clipped, interior top of dj has a taped repair.. Blue cloth over boards with silver lettering; black dust jacket, blue and yellow lettering; bw portrait frontispiece, xii, 227 pp, bw illustrations and plans. Contents include: Preface -- The architect and his work -- Plates -- The Adler chronology -- Adler's architectural library -- Address by Alfred E. Hamill. Includes photographs by Ezra Stoller and others.
"In the years between 1912 and 1935, his most active period, David Adler designed and built some of the finest dwelling places in the United States... One of the most original and creative men of his profession, Adler combined a passion for detail with a total sense of the whole; his houses were complete in their harmony. He planned the landscaping, and often did the decoration and furnishing of the interior to establish a compelling unity and grace. Most of David Adler's houses were built in Chicago, Illinois, and along Chicago's North Shore although a few were built for clients in places as far from his home city as Honolulu, Hawaii and Sarasota, Florida."- dust jacket. (Inventory #: 182136)
$125.00 add to cart or Buy Direct from Mullen Books
Share this item

London : Privately Printed for the Author by Waterlow & Sons , 1928
(click for more details about Hunting, Hawking, Shooting: Illustrated in a Catalogue of Books, Manuscripts, Prints and Drawings; Volume 3)

The Holy Experiment: a Message to the World from Pennsylvania. Series of Mural Paintings By Violet Oakley, in the Governor's Reception Room and in the Senate Chamber of the State Capitol at Harrisburg, Pennsylvania, U.S.A.

Philadelphia, PA : Privately printed , 1922
(click for more details about The Holy Experiment: a Message to the World from Pennsylvania. Series of Mural Paintings By Violet Oakley, in the Governor's Reception Room and in the Senate Chamber of the State Capitol at Harrisburg, Pennsylvania, U.S.A.)
View all from this seller>