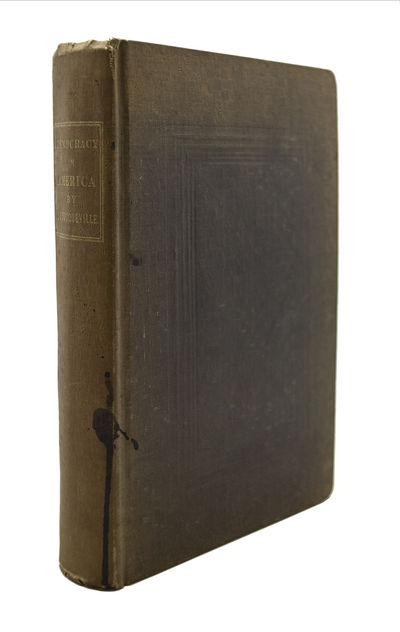 by TOCQUEVILLE, Alexis de
First American Edition of the First Volume Printed TOCQUEVILLE, Alexis de. Democracy in America. Translated by Henry Reeve. Original preface and notes by John C. Spencer New York: George Dearborn and Co.; Adlard and Saunders, 1838. First American edition of volume one. The first and second volume were published separately, the second volume being published in 1840. Octavo (8 3/4 x 5 5/8 inches; 220 x 143 mm). xxx, 464pp. Publisherís light purple cloth, ruled in blind and with blind-stamped diced background. Spine ruled and lettered in gilt panel. Spine and board edges sunned to brown. An ink stain on bottom half of spine, reaching slightly to front board. Minor fraying and chipping to spine extremities. Boards slightly rubbed. Previous ownerís old ink signature [E.R. Potter, noted Rhode Island lawyer and politician] on title-page, not affecting text. Some light foxing throughout. Pages 165-168 and 423-424 opened rough. Overall very good and very uncommon. Printing and the Mind of Man describes this as "One of the most important texts on political literature" (PMM 358). It is also one of the cornerstones of Americana. De Tocqueville's treatise on America remains to this day one of the most important works about American society and its politics. It is still considered to be "the deepest, wisest, and most farseeing work ever written about America." There are chapters on geography, sociology, law, government, manners, religion, education, race relations and much more. De Tocqueville's intention in writing the work was two-fold; he wanted to describe and analyze the new democratic system in America for his fellow Europeans, and he wanted to provide a guide for political thought and action for the future of Europe, and more particularly his native France. He was looking for a "new science of politics [which] is needed for a new world" and he felt that he had found this new science in the developing America (Nisbet, The Sociological Tradition, p. 120). Howes T238 Sabin 96064. Printing and the Mind of Man 358 (For first French edition). HBS 68420. $3,000 (Inventory #: 68420)
$3,000.00 add to cart Available from
Heritage Book Shop
Share this item