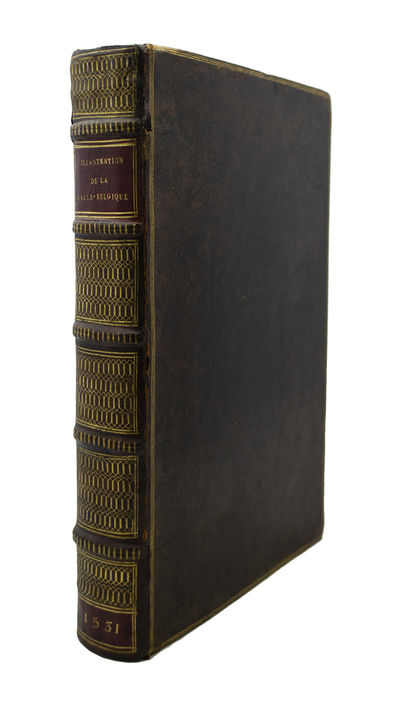 by GUYSE, Jacques de
Great Mediaeval Chronicle [GUYSE, Jacques de]. Le premier [ñsecond, ñtiers] volume des Illustrations de la Gaulle belgique, antiquitez du pays de Haynnau et de grand cite de Belges...Paris: FranÁois Regnault [and] Galliot du PrÈ, 1531-1532. First edition, with Regnaultís imprint on the first title (an issue with Du PrÈís imprint is also known). Three volumes in one. Folio (12 7/8 x 8 1/4 inches; 327 x 210 mm.). [8], cxlii [i.e., cxli], [1, imprint]; [4], lxxxii; [6], cviii leaves. Lettres b‚tardes, double columns. Du PrÈís woodcut architectural border on the title-page of each volume. The first two titles (including the corner medallions of the borders) are printed in red and black. The title for Volume III is in black only, with an initial L in VÈrard style. Volume I has two impressions of a full-page woodcut showing the presentation of a book to Philip the Good, Duke of Burgundy. Volume III has a woodcut of the author at work, and a full-page woodcut of a French king and parliament. (The presentation cut had been previously used in Regnaultís 1528 Le Rozier ou Epithome hystorial de France and the parliament cut in Du PrÈís 1520 Suetonius.) Woodcut devices of Regnault (at the end of Volume I) and Du PrÈ (at the end of Volume III). CriblÈ and other woodcut initials in five sizes. Early eighteenth-century mottled calf. Triple-ruled in gilt. Spine elaborately tooled in gilt. Two red morocco spine labels, lettered in gilt. Board edges gilt. Marbled endpapers. Some occasional light toning. Previous owner's old ink signature on title-page of the first book, not affecting text. A small old bookplate on front free endpaper. Some small minor dampstaining to top margin of 2-3 pages of prologue. Overall a very good, tall copy (taller than the Harvard copy described by Mortimer) of this handsome book. A rare Chronicle, containing not only the History of the Province of Hainault but dealing very largely with the affairs of the Netherlands, France and England. Jacques de Guyse (d. 1399) was a Franciscan from Mons in the county of Hainaut in Belgium, and he was the first to write a chronicle of the region. The present work is an abridged translation of the Latin manuscript by Guyse entitled Annales Hannoniae seu Chronica illustrium principum Hannoniae. Historically the translation has been assigned to Jacques de Leussauch, also known as Jacques de LessabÈ, author of a work on Hainaut published in 1534. However, the preface states that a fifteenth-century translation forms the basis for the present edition. An old booksellerís description conjectures that the translator may have been Wauquelin (d. 1452), who translated other historians for Philip the Good (1396-1467), including Froissart. Brunet II, col. 1836. Graesse III, p. 188. Harvard, French, 268. STC French, Supplement, p. 40. Not in Adams, Fairfax Murray, Cioranesco. HBS 68421. $6,750 (Inventory #: 68421)
$6,750.00 add to cart Available from
Heritage Book Shop
Share this item