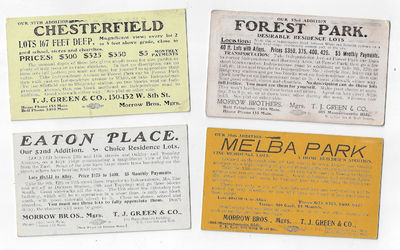 [Kansas City]: T.J. Green & Co. Undated, likely early 20th century. Four cards measuring approximately 2.5 x 4.5 inches, each advertising a differrent residential development in Kansas City: Eaton Place, Forest Park, Melba Park, and Chesterfield Each card has brief promotional text ("fine residence lots," "magnificent view, every lot 2 to 3 feet above grade, close to good school, stores, and churches"), prices (ranging from $175 to $425), and directions on one side and a map showing the streets and numbered lots on the other. Three cards near fine, one (Melba Park) very good, with a spot of abrasion on the map side. The T.J. Green Company was established in 1881. By 1886, a book on the city's commercial development, The Commerce of Kansas City, praised them as "among the most prominent and reliable firms" involved in developing the areas of the city beyond the central business district that would meet the needs of a rapidly growing population. "Their system is to purchase acre tracts that are in good locations and as near as possible to city itself, then to subdivide them into town lots and so dispose of them on the open market. This is really developing the city or, in other words, it is constantly creating new additions and suburbs. That these transactions have proved most profitable under the experienced management of this firm is shown in the daily increasing value of this class of property, and in the fact that not a single client who has acted on their advice has failed to make a very handsome return on his investment." Evidently the company's success continued; the four tracts offered on these cards are listed as the company's 52nd, 53rd, 56th, and 57th "additions." We find no examples of these or other T.J. Green advertising cards in OCLC. (Inventory #: 21482)
$375.00 add to cart or Buy Direct from Walkabout Books
Share this item

Homes of American Authors; Comprising Anecdotical, Personal, and Descriptive Sketches by Various Writers. Illustrated with Views of their Residences from Original Drawings, and a Fac-Simile of the Manuscript of Each Author

New York : G.P. Putnam , 1853
(click for more details about Homes of American Authors; Comprising Anecdotical, Personal, and Descriptive Sketches by Various Writers. Illustrated with Views of their Residences from Original Drawings, and a Fac-Simile of the Manuscript of Each Author)

Boston, New York, Philadelphia, and Pittsburgh : E.A. Strout Company
(click for more details about The Great Peace Movement, Back to the Farm)
View all from this seller>