When She Was Good. 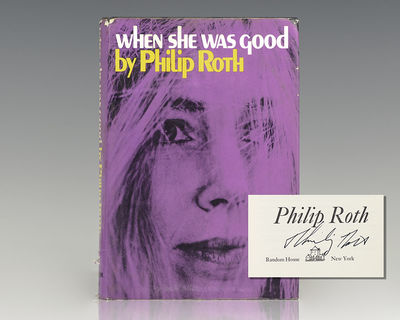 by Roth, Philip
New York: Random House, 1967. First edition of Roth's second novel. Octavo, original cloth. From the library of Christopher Lasch, with his name to the front free endpaper. Lasch was a historian, moralist, and social critic who was a history professor at the University of Rochester. Lasch sought to use history as a tool to awaken American society to the pervasiveness with which major institutions, public and private, were eroding the competence and independence of families and communities. He strove to create a historically informed social criticism that could teach Americans how to deal with rampant consumerism, proletarianization, and what he famously labeled the "culture of narcissism." Very good in a good dust jacket. Jacket design by Roy Kuhlman. "High, careful tragedy, nasty as life, and Roth emerges...as a Dreiser who can write" (Stanley Elkin). The literary critic Harold Bloom declared that "Roth is a living master" in The New York Review of Books. (Inventory #: 117571)
$475.00 add to cart or Buy Direct from
Raptis Rare Books
Share this item

New York : Coward-McCann , 1931
(click for more details about August.)
View all from this seller>