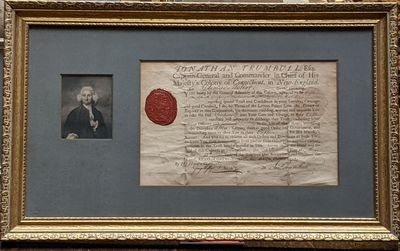 by TRUMBULL, Jonathan (1710 - 1785)
1773. very good. Partly-printed DS, signed "Jonth. Trumbull", one page, 13 Â¼" X 8", May 25th, 1773, as Governor of Connecticut, appointing Ebenezer Walker as Captain of the fifteenth Company of Trainband, in the fifth Regiment in the Colo...in His Majesty%u2019s Service. Countersigned by George Wyllys as Secretary of the Colony, whose signature is below the red wax seal that remains intact. The document is set into a grey mat with two diamond-cut openings, accompanied by a small steel engraving of the Governor, and placed in a gold gilt wood frame to 24 Â½" X 15". Condition: Evenly toned with mild foxing - otherwise very good. Governor of Connecticut who was the only governor to side with the Americans during the Revolutionary War. (Inventory #: 298852)
$600.00 add to cart or Buy Direct from
Argosy Book Store
Share this item

Death in the Afternoon

New York : Scribner , 1932
(click for more details about Death in the Afternoon)

(Sketch I No. 3) Galveston Entrance Texas

Washington : Government Printing Office , 1853
(click for more details about (Sketch I No. 3) Galveston Entrance Texas)
View all from this seller>