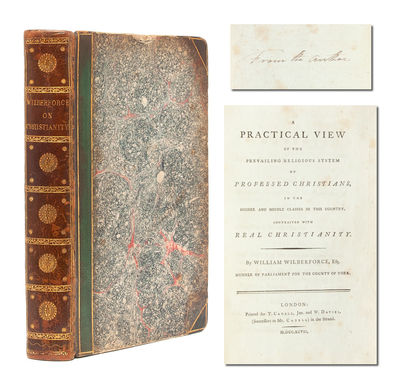 by Wilberforce, William
London: T. Cadell and W. Davies, 1797. First edition. Contemporary half morocco over marbled boards embossed in gilt. Spine slightly sunned and small bump to upper front board; in all a tight, square copy. Light scattered foxing throughout, as is common of the era. Small loss to outer margin of pages 287-88 not affecting text. Collating [4], 491, [1, blank], [18, index and errata]: complete. Inscribed on the verso of the front endpaper "From the Author," and likely presented to the innovator William Bentall, whose armorial bookplate appears on the front pastedown. Bentall's invention of the steam powered mill that England had begun to use at home and in its colonies decreased the demand for slave labor. Wilberforce, a Puritan and ardent abolitionist saw the mill as a strategic move, not only bringing Bentall into an active appreciation for the work of Christ but also leveraging his influence to exert pressure against the slave trade. A scarce and important work, ESTC records only 8 copies at North American institutions and it last appeared at auction almost 30 years ago. It is the only signed copy we have been able to locate.

Considered one of the most important books in Christian history. Here, Wilberforce positions his own Puritan beliefs as part of a wider matrix of conversion-via-books. Beginning with Richard Sibbes, whose 17th century texts sparked the conversion of Richard Baxter and inspired him to write Call to the Unconverted to Turn and Live, Wilberforce considers how that book influenced Philip Doddriddge and led to him to write The Rise and Progress of Religion in the Soul -- the book that began Wilberforce's own turn to Puritanism.

For Wilberforce, activism is not optional for Christians. It is a definitional quality. "His book is concerned with convincing those who call themselves Christians to pursue 'the real nature and principles of the religion which they profess.' Christianity is not mere morality to be held in private. It is a revelation, bringing new rights and correspondent duties. It is an entire way of life that requires diligence and study that should affect every aspect of one's public and private life" (Hendrickson). Abolitionism, then, is Wilberforce's contribution to the Puritan geneology from which he emerges and which will continue to spring from him. The belief that the ownership and enslavement of other humans was a violation of Christian teaching and basic humanity became not a privately held morality, but a public mission pursued for his whole lifetime.

A scarce first edition with abolitionist associations that reinforce the book's message.

Washington DC : McGill & Witherow , 1864
(click for more details about First Annual Report of the National Association for the Relief of Destitute Colored Women and Children)

Friendship Album of a Young Woman at the Georgetown Female Seminary

Scott County, Kentucky 1852
(click for more details about Friendship Album of a Young Woman at the Georgetown Female Seminary)
View all from this seller>